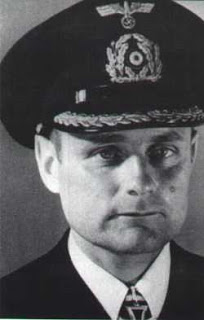 Siegfried Freiherr von Forstner who patrolled four days off New England in April 1942. Photo courtesy of http://uboat.net/men/forstner.htm
Kapitänleutnant(later Korvettenkapitän) Siegfried Freiherr von Forstner brought his command U-402 into New England waters on a westbound trajectory starting south of Cape Race, Nova Scotia on the 16th of April and ending south of Montauk, New York four days later on the 19th of April, 1942.
On this patrol he sank the Empire Progress off Nova Scotia three days before entering New England waters. Then he sank the Ashkhabad and the USS Cythera (PY 26) off Hatteras on the 30th of April and 2ndof May respectively. After 69 of the patrol yacht’s crew were killed in the final attack, von Forstner picked up the two survivors and headed back to St. Nazaire, where U-402 arrived on 20 May, having set out on 26 March 1942 (Wynn, Vol. 1, pp.263-264).
U-402 was in the fifth wave of Operation Paukenschlag. Von Forstner attacked no ships in New England waters. Born in Hannover in 1910 he was killed by aircraft from USS Card on 13 October 1943 when he and all members of the U-402’s crew were sunk. He had received the Knights Cross earlier that year, and been promoted to Korvettenkapitänin April. He was 33 when killed.
von Forstner and his younger brother Wolfgang-Friedrich were both U-Boat skippers (Uboat.net). A member of the Crew of 1930, he early on served aboard the light cruiser Nürnberg. After joining U-Boats in April 1940 he served aboard U-99 under Otto Kretschmer before moving to U-59 for more training. He commissioned U-402 and was her only commander from October 1941 up until the boat’s loss. Overall von Forstner accounted for 18 Allied ships sunk or damaged, roughly 100,000 tons.
SOURCES:
Busch, Rainer and Röll, Hans-Joachim, “German U-Boat Commanders of World War II, A Biographical Dictionary,” Greenhill Books, London and Naval Institute Press, Annapolis, MD, 1999
Helgasson, Guðmundur and Kolbicz, Rainer, www.uboat.net, 2015
Högel, Georg, “U-Boat Emblems of World War II 1939 – 1945,” Schiffer Military History, Atglen, PA, US, 1999
Kurowski, Franz, Knights of the Wehrmacht, Knight’s Cross Holders of the U-Boat Service,” Schiffer Military/Aviation History, Atglen, PA, US, 1995
Mason, Jerry, www.uboatarchive.net – for the KTB or war diary of this patrol, 2015
Niestlé,Axel, “German U-Boat Losses During World War II – Details of Destruction,” Naval Institute Press, Annapolis, MD, 1998