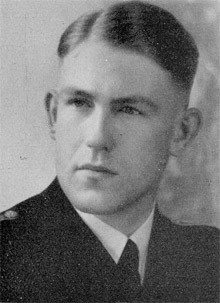 Karl-Ernst Schroeter, who patrolled New England waters for 7 days in April and May 1942. Photo courtesy of http://uboat.net/men/commanders/1134.html
Kapitänleutnant(later Korvettenkapitän) Karl-Ernst Schroeter brought his command U-752 on a seven-day incursion into New England waters during which he sank the freighter West Imboden on his second day. On the 20th of April he entered the area south of Cape Sable, Nova Scotia west bound several hundred miles offshore.
On the 21st he dispatched the West Imboden, then headed southwest and finally west and out of the region south of Montauk New York on the 23rd. That same day he damaged the Norwegian ship Reinholt west of Montauk New York and thus outside of New England waters. The U-Boat returned on the 5th of May, this time heading east past Montauk in a straight line south of Nantucket to exit the region three days later, on the 7th of May south of Cape Race.
The West Imboden was a US steamer en route from Durban and Cape Town South Africa to Boston via Trinidad. Early on the morning of the 21st April U-752 struck the ship with a torpedo roughly 175 miles east of Nantucket. Schroeter brought U-752 to the surface and began shelling the ship before all 35 officers and men were clear of the stricken ship. Thirty-five shells later the West Imboden was on fire but all the men had managed to get clear. The men were questioned by the Germans (who replied “That’s good” when told no one had been killed), and the following day picked up by USS Bristol DD 453 and taken to Portland, Maine.
Schroeter and his men again employed gunfire on the Reinholt, a Norwegian motor freighter two days later when southwest of Montauk. The Norwegians however managed to return fire fourteen time and suffered one injured and another killed. Though the ship caught fire a destroyer (the USS Rhind, DD 404) came to the rescue and helped her limp to New York Harbor. The Norwegian skipper, Captain Hans Nielsen and 15 of his men received the War Cross (for the Captain) and other War Medals from the Norwegian government.
On the 1st of May 1942 U-752 sank the Norwegian ship Bidevind in roughly the same position as the Rhineholt. All 36 men managed to get away to the US Coast Guard station on Toms River, New Jersey. U-752 returned to St. Nazaire on the 21st of May, having left La Pallice on the 28th of March. The boat was one of a dozen in the fifth wave of Operation Paukenschlag.
Born in May of 1912, Schroeter’s total tally of Allied ships sunk or damaged was 10 for over 38,000 tons. He joined the navy in the Crew of 1934 and saw experience aboard U-9. Then he was 1st Watch Officers of U-38 under Leibe and later on the training boat U-121. He commissioned U-752 in May 1941 and was her only commander until both she and her commander were sunk by British Swordfish aircraft from HMS Archer in the north Atlantic while going after Convoy HX 239 on 19 May 1943. Schroeter was struck in the head by gunfire from aircraft as he climbed the conning tower. Seventeen men were rescued by Allied escorts and U-91 (UBoat.net and Clay Blair, Hitler’s U-Boat War – the Hunted, 1942 – 1945, 1998). Schroeter was 30 years of age.
SOURCES:
Busch, Rainer and Röll, Hans-Joachim, “German U-Boat Commanders of World War II, A Biographical Dictionary,” Greenhill Books, London and Naval Institute Press, Annapolis, MD, 1999
Helgasson, Guðmundur and Kolbicz, Rainer, www.uboat.net, 2015
Högel, Georg, “U-Boat Emblems of World War II 1939 – 1945,” Schiffer Military History, Atglen, PA, US, 1999
Kurowski, Franz, Knights of the Wehrmacht, Knight’s Cross Holders of the U-Boat Service,” Schiffer Military/Aviation History, Atglen, PA, US, 1995
Mason, Jerry, www.uboatarchive.net – for the KTB or war diary of this patrol, 2015
Niestlé,Axel, “German U-Boat Losses During World War II – Details of Destruction,” Naval Institute Press, Annapolis, MD, 1998