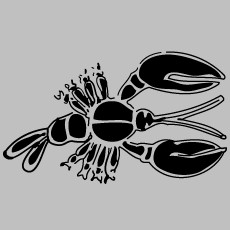 The emblem for U-136, a black lobster, which was carried on the conning tower. Courtesy of Helgasson & Högel, http://uboat.net/special/emblems/emblem320.html
KapitänleutnantHeinrich Zimmermann operated U-136, of which he was the sole commander during its career, both west and east-bound across New England waters for eight days total between the 12th of April and the 6th of May 1942.
At first he entered south of Cape Sable Nova Scotia heading southwest to a point well south of Montauk, New York, where he exited the area on the 15th of April. Then on the 3rdof May U-136 returned to the region closer to Montauk before heading south then east, exiting the area again south of Cape Sable on the 6th of May.
Though Zimmermann sank no ships off New England, he is credited with destroying the Canadian schooner Mildred Pauline off Nova Scotia on the 8th of May 1942, two days after leaving New England waters. The hapless schooner was en route from Barbados to St. John’s Newfoundland laden most likely with rum or molasses when it was sunk, and all seven officers and men perished in the cold waters.
While still in US waters Zimmermann damaged the Axtell J. Byles on the 19th of April (4 days after leaving New England, off Cape Hatteras), followed by the Empire Drum on the 24th and the Arundo on the 28th – both sunk.
Heinrich Zimmermann was in the Crew of 1933, having been born in 1907. He served in Minesweeping flotillas up to March 1941, when he joined U-Boats (Uboat.net). After commissioning U-136 in Bremen Germany in August 1941 he began patrolling in January 1942 as the first Paukenschlag boats attacked the US coast. Overall he sank or damaged eight ships of nearly 36,000 tons. He received no decorations.
Zimmermann was killed when U-136 was sunk west of the Madeira Islands on the 11th of July 1942. The Allied vessels which delivered the attack were the Free French destroyer Leopard, the Royal Navy sloop HMS Pelican, and the British Frigate HMS Spey (Helgasson, Uboat.net, Niestle). Out of a crew of 45 there were no U-Boat survivors. Zimmermann was 35.
SOURCES:
Busch, Rainer and Röll, Hans-Joachim, “German U-Boat Commanders of World War II, A Biographical Dictionary,” Greenhill Books, London and Naval Institute Press, Annapolis, MD, 1999
Helgasson, Guðmundur and Kolbicz, Rainer, www.uboat.net, 2015
Högel, Georg, “U-Boat Emblems of World War II 1939 – 1945,” Schiffer Military History, Atglen, PA, US, 1999
Kurowski, Franz, Knights of the Wehrmacht, Knight’s Cross Holders of the U-Boat Service,” Schiffer Military/Aviation History, Atglen, PA, US, 1995
Mason, Jerry, www.uboatarchive.net – for the KTB or war diary of this patrol, 2015
Niestlé,Axel, “German U-Boat Losses During World War II – Details of Destruction,” Naval Institute Press, Annapolis, MD, 1998