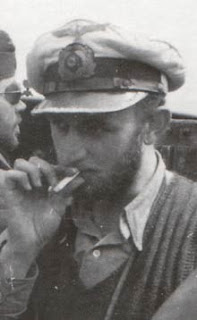 Paul-Karl Loeser who brought U-373 for a 10-day, 2-way patrol of New England in March, 1942. Courtesy of http://uboat.net/men/commanders/744.html
Oberleutnant zur See (later Kapitänleutnant) Paul-Karl Loeser brought U-373 on a two-way incursion into New England waters between 19 and 30 March 1942, during which he sank the ship Thursobank on the 22nd southeast of Nantucket. U-373 was one of 11 boats on the 4th wave of Operation Paukenschlag. She left Lorient on 1 March and returned to La Pallice on 17 April.
The patrol entered New England south of Cape Sable and U-373 then headed westwards to a point south of Nantucket. After sinking the Thursobank the sub headed northwest off Buzzards Bay then west to exit south of Montauk, New York on the 24th of March.
Coming back eastwards on the 27th of March the sub headed straight east along the Continental Shelf and exited the region south of Cape Sable on the 30th of March after a cumulative 10 days. On the way to the region U-373 sank the Mount Lycabettus on the 17th of March south of Nova Scotia.
The Thursobank was a British motor ship of 5,575 tons heading from New York to Cape Town and Alexandria Egypt when at 5:098 AM German time it was caught by U-373 southeast of Nantucket. A second torpedo sealed the ship’s fate. The attack killed 30 men, however 26 were rescued after a tumultuous lifeboat voyage during which Chinese crew stripped the British officers of equipment and authority. They were rescued by the Havsten and arrived Halifax 28 March.
Paul-Karl Loeser sank most of his three ships of 10,263 tons on this patrol. A member of the Crew of 1935, he was born in April 1915 in Berlin and survived the war until 1987 and age 71. His first U-Boat was U-30 in which he did not patrol. Loeser received no decorations during his career.
SOURCES:
Busch, Rainer and Röll, Hans-Joachim, “German U-Boat Commanders of World War II, A Biographical Dictionary,” Greenhill Books, London and Naval Institute Press, Annapolis, MD, 1999
Helgasson, Guðmundur and Kolbicz, Rainer, www.uboat.net, 2015
Högel, Georg, “U-Boat Emblems of World War II 1939 – 1945,” Schiffer Military History, Atglen, PA, US, 1999
Kurowski, Franz, Knights of the Wehrmacht, Knight’s Cross Holders of the U-Boat Service,” Schiffer Military/Aviation History, Atglen, PA, US, 1995
Mason, Jerry, www.uboatarchive.net – for the KTB or war diary of this patrol, 2015
Niestlé,Axel, “German U-Boat Losses During World War II – Details of Destruction,” Naval Institute Press, Annapolis, MD, 1998