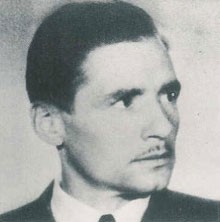 Walter Flachsenberg, who patrolled off New England in U-71 for nine days March 16 to April 2nd, 1942. Photo courtesy of http://www.uboat.net/men/commanders/293.html
Kapitänleutnant (later Korvettenkapitän) Walter Flachsenberg, aged 33, brought U-71 into New England waters for two transits, inbound and outbound, between the 16th of March and 2ndof April 1942. The first, inbound leg began south of Cape Sable Nova Scotia and headed southwest out of the region on the 21st of March. The patrol began in St. Nazaire on 23 February and ended in La Pallice on the 20th of April.
On the 17th of March Flachsenberg found and destroyed the Norwegian motor tanker Ranja which he hit near the bridge with a pair of torpedoes. A coup de grace started a fire the length of the vessel. Captain Andreas Mossin and all 34 officers, men, and gunners of the Ranja were killed.
On the 20th of March U-71 encountered and sank the US-flagged steamer Oakmar south of Nantucket. Out of 36 men two were drowned, four from the port lifeboat were never found, and 30 survivors were rescued by the Stavros and landed in Bermuda (UBoat.net). Captain Nolan Eugene Fleming was one of those lost.
On the 26th of March whilst off Hatteras Flachsenberg found and sank the US ship Dixie Arrow, but was fought off by the destroyer USS Tarbell, which attacked with depth charges, but broke off its attack to rescue survivors of the Dixie Arrow (Wynn, Vol. 1, p53). On the 31st of March U-71 sank the British 12,915-ton San Gerardo between Nantucket and Bermuda. The loss of the San Gerardo, Oakmar, and Eastmoor are covered in detail at www.uboatsbermuda.blogspot.comas they were considered closer to Bermuda than New England when sunk, unlike the Ranja.
The second leg eastbound began south of Montauk, New York on the 30th of March and ended further to the southeast on the 2nd of April when the boat headed south towards Bermuda while south of Nantucket. Just before leaving New England waters Flachsenberg sank the British steamer Eastmoor of 5,812 tons. The first two torpedoes missed. However at 4:03 am German time a third torpedo dispatched the ship in 12 minutes.
Captain James Basil Rodgers and 15 officers and crew were killed, however 36 men managed to be picked up by another British steamer, the Calgary, and they were landed in Cape Town, South Africa. The ship had been bound from Savannah to Halifax then the UK with 7,500 tons of general cargo.
Walter Flachsenberg was born in October 1908 and survived the war, living until November 1994 and the age of 86.
He was in the Crew of 1929 and served in Naval Flak before joining U-Boats in April 1940 (UBoat.net). He served under Schepke in U-100 doing very well until gaining command of U-71 in December 1940. All of his five ships of 39,000 tons were accrued on this one patrol before Flachsenberg moved ashore in administrative roles, emphasizing torpedo testing. He joined the new German navy following the war and retired from it as Rear Admiral. He received no decorations.
SOURCES:
Busch, Rainer and Röll, Hans-Joachim, “German U-Boat Commanders of World War II, A Biographical Dictionary,” Greenhill Books, London and Naval Institute Press, Annapolis, MD, 1999
Helgasson, Guðmundur and Kolbicz, Rainer, www.uboat.net, 2015
Högel, Georg, “U-Boat Emblems of World War II 1939 – 1945,” Schiffer Military History, Atglen, PA, US, 1999
Kurowski, Franz, Knights of the Wehrmacht, Knight’s Cross Holders of the U-Boat Service,” Schiffer Military/Aviation History, Atglen, PA, US, 1995
Mason, Jerry, www.uboatarchive.net – for the KTB or war diary of this patrol, 2015
Niestlé,Axel, “German U-Boat Losses During World War II – Details of Destruction,” Naval Institute Press, Annapolis, MD, 1998