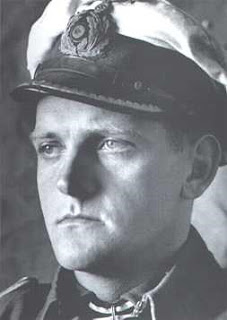 U-Boat Ace Erich Topp c/o http://uboat.net/men/topp.htm
Kapitänleutnant(later Fregattenkapitän) Erich Topp brought U-552 into New England on a 6-day incursion between 25 and 30 March 1942. The submarine entered the area south of Cape Sable and headed southwest then northwest to a point off ProvinceTown Massachusetts (Cape Cod) on the 27th. After three days near the cape U-552 headed southwest to exit the area south of Montauk on the 30th.
The patrol began in St. Nazaire onk 7 March and ended in the same port 52 days later on the 27thof April 1942. During that time Topp sank 7 ships of 45,731 tons, all outside the New England region, starting with the Ocana off Nova Scotia on the 25thof March, the day he entered the Gulf of Maine. The Ocana was a tanker which proved obstinate to sink: the ship tried to ram U-552, which counter-attacked and set the vessel on fire (Wynn, Vol. II, p.28). The hulk drifted until 15 April when the HMCS Burlington sank it.
This was followed between the 3rd and 10th of April by six ships sunk off the Cape Hatteras region: David H. Atwater, Byron D. Benson, British Splendour, the whale factory ship Lancing, Atlas, and Tamaulipas. Then the boat returned to France.
Erich Topp was born in Hannover in July 1914 and survived the war, living until the age of 91 and the day after Christmas 2005. A member of the Crew of 1934 he did service on the Karlsruhe then joined U-Boats in October 1937 (UBoat.net). His first boat was as watch officer on U-46. He then assumed command of U-57 from Korth. In U-552 which he commissioned he scored most of his total bag of 40 ships sunk or damaged totaling over 230,000 tons, including a warship sunk.
Understandably Topp was highly decorated, ultimately with the Knights Cross with Oak Leaves and Crossed Swords in August 1942. He wrote the manual on operating the new Type XXI Elektro Boats and commanded U-2513 up until its surrender in Norway in May of 1945. After a stint as a fisherman Topp became an architect before rejoining the new German Navy, spending time in the US with NATO. He retired in 1969. Up until the mid-1980s he consulted for shipyards.
SOURCES:
Busch, Rainer and Röll, Hans-Joachim, “German U-Boat Commanders of World War II, A Biographical Dictionary,” Greenhill Books, London and Naval Institute Press, Annapolis, MD, 1999
Helgasson, Guðmundur and Kolbicz, Rainer, www.uboat.net, 2015
Högel, Georg, “U-Boat Emblems of World War II 1939 – 1945,” Schiffer Military History, Atglen, PA, US, 1999
Kurowski, Franz, Knights of the Wehrmacht, Knight’s Cross Holders of the U-Boat Service,” Schiffer Military/Aviation History, Atglen, PA, US, 1995
Mason, Jerry, www.uboatarchive.net – for the KTB or war diary of this patrol, 2015
Niestlé,Axel, “German U-Boat Losses During World War II – Details of Destruction,” Naval Institute Press, Annapolis, MD, 1998