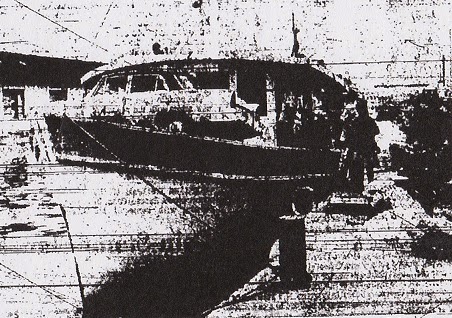 M/V Spanish Rose (the second vessel to carry the name – see “Current Queen” for the first), docked in Nassau 1985. Note the car placed precariously on the foredeck ahead of the wheelhouse. It looks as though this photo was taken at Prince George Docks, not Potter’s Cay Docks, Nassau.

Source: LA TIMES Spanish Wells A Bahamas outpost that dwells in another time is a choice for sunshine and serenity, May 12, 1985|JERRY HULSE | Times Travel Editor

FATE: Sank between Nassau and Spanish Wells while in ballast, in daytime, no persons were lost.

Source: http://issuu.com/smgbiz/docs/sept-oct2013teweb
An Eleutheran Profile, Mr. Gurney Elon Pinder, The Eleutheran, Sept/Oct 2013
“In 1965, after hurricane Betsy, we bought a 64 foot boat and called it the Spanish Rose [with his brother Stephen Pinder], which was considered a large boat in those days.” They would use the vessel to transport produce and passengers to Nassau and bring general cargo back to the island.”
“We had the boat until 1977 when we sold it to people in the Current who renamed it the Current Queen. Then we had a bigger boat built, a 75 footer and kept the name Spanish Rose. Me and my brother, we worked together all our lives.
In 1997 “Before the Fast Ferries and the Roll on Roll off cargo boats, Ronald’s Service Center use dto pack lobster – same as they are doing now – and we would take it to Nassau because we had refrigeration in the boat. We would take the processed lobster into Nassau and load it onto another boat that was going into the US.” 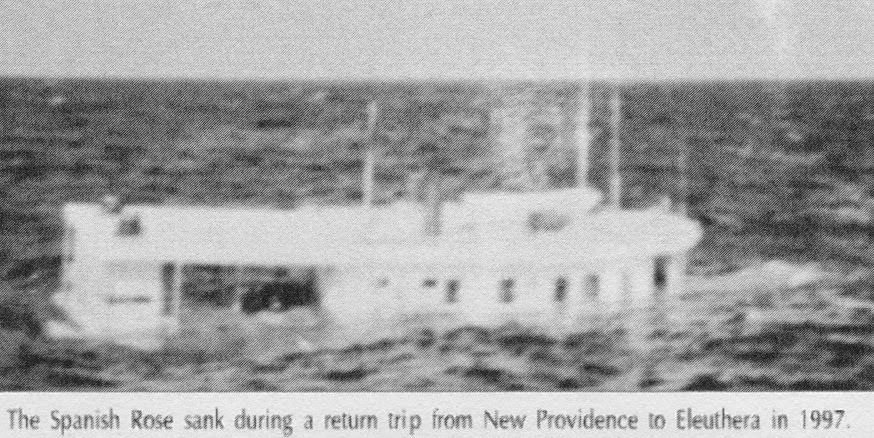 The M/V Spanish Rose (2nd) sinking between Nassau and Eleuthera, 1997, from the Eleutheran Oct/Nov 2013 pages 14-15.
“So Gil Pinder said to me, I have 26,000 pounds of lobster tails to go to Nassau…. I said not problem and loaded them Saturday, and left here Sunday morning at 4 am with my wife and nephew. We got into Nassau 8:30am – off loaded and left to return between 3:00pm and 3:30pm that afternoon. At 4pm I had to put out a mayday call – the boat was sinking and rapidly. We were in the ocean, and in the engine room the water was up four feet, but no lives were lost. We launched a lifeboat, paddled off, and we didn’t even get we.”
From LA TIMES Spanish Wells A Bahamas outpost that dwells in another time is a choice for sunshine and serenity, May 12, 1985|JERRY HULSE | Times Travel Editor

“Alongside the dock a familiar freighter, the Spanish Rose, was taking on provisions. She’d be sailing at dawn the following day, delivering cargo and passengers to Nassau. If you’re in no hurry, it’s a bargain–only $18 for the five-hour ride, which includes a soft drink and a sandwich and a world of untroubled waters.


Don’t get me wrong, this isn’t the Queen Elizabeth 2. Sometimes an errant chicken will run squawking along the deck in a flurry of feathers, a dog hot on its spurs. But there are compensations. If the seas are smooth, it’s a pleasant journey, and occasionally someone will break out a guitar and strum calypso melodies.”