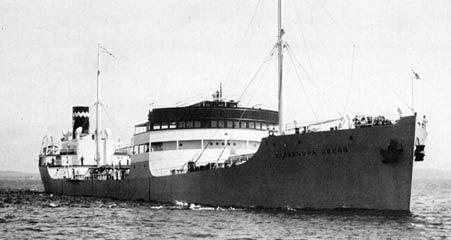 Motor Tanker Alexandra Hoegh under way. http://warsailors.com/singleships/
alexandrahoegh. Dame Siri Lawson of Warsailor’s source was Høegh &
Co,’s fleet list, with their permission.
The motorized tanker
Alexandra Hoegh was built as yard # 258 in Gothenburg Sweden by Eriksberg
Mekaniske Verkstad A/B in 1935. The ship was 8,248 gross tons, 469 feet by 61
feet long and wide. Her six-cycle, two-stroke diesel engine was manufactured by
the builder and propelled the ship at 12 knots. She had an eventful war, with
multiple trans-Atlantic voyages from the Med to Canada, South America and the Caribbean,
New York and Halifax. Then on the 2nd of January she began a cold
voyage from Portland Maine for Caripito in Venezuela, where she arrived on the
12th. The following day the tanker turned around for Halifax.
The
master of Alexandra Hoegh was Anton Bredo Heian of Norway, and his first
officer was Franz Speich. Most of the crew were Norwegian, however a cook Sven
Hudin was Swedish as was able-bodied seaman Kaare Karlsen, a mess boy named
Anthony Zahardis was American and Electrician Knud Lund was Danish. The
original owners were Leif Høegh & Co. A/S, Oslo, however during the war she
fell under the control of Nortraships, the exiled Norwegian government’s
entity. The new owners were Skibs-A/S Arcadia.
Alexandra
Hoegh could carry 12,600 tons of cargo, and in Venezuela on her last voyage she
loaded roughly 12,000 tons of crude oil. After leaving the Caripito just after
dawn on the 13th, the voyage proceeded uneventfully until the
afternoon of Wednesday the 21st of January. That afternoon around
4:21 pm Able-bodied Seaman Kristoffersen witnessed a torpedo streaking towards
the tanker’s port side, but it was already too late. A torpedo from the German
submarine U-130 under Ernst Kals struck the port bow of the Alexandra Hoegh whilst the ship
was several hundred miles east-southeast of Cape Cod and Nantucket and about
120 miles south of Shelburne, Nova Scotia in thousands of feet of water.
Captain
Heian and Second Officer Bjarne Eftang opted to remain on board whilst their 26
crew mates abandoned ship, the main engine having been promptly stopped. Eftang
sent out radio distress messages which were received and acknowledged by
stations in Halfax, on Canso and on Seal Rock, Nova Scotia. About 4:35 pm the
skipper and mate abandoned ship in the starboard motorboat and were getting
away from the ship when they saw a submarine periscope closing on the ship from
port. At about 4:54 pm U-130 fired another torpedo into the Alexandra Hoegh,
after determining that all the men had gotten away in three boats.
The
effect of the second torpedo was immediate: it struck in the middle of the
tanker and snapped the ship into two parts as a result of a resonant explosion.
Both halves of the ship drifted away from each other, with the bow portion
sinking quicker than the aft. Soon darkness loomed, and to all concerned the
fate of both portions of the Norwegian ship seemed sealed. Both the set of
three lifeboats with 28 mostly Scandinavian sailors and the German U-boat left
the scene, for the Alexandra Hoegh to sink alone, shattered into two.
By
midnight the men rationalized the lifeboat distribution and climbed into one of
the non-motorized boats, casting a third boat adrift. With dawn came a possible
periscope sighting and then in mid-morning they heard and saw strong
detonations or explosions to the east, however could not verify any ship was
being attacked there. It was Thursday the 22nd of January.
Early
the following morning, at 1 am on Friday the 23rd, they found the
motorboat had consumed all but three gallons of the petrol, so they conserved
it and set sail. At 3 am they sighted a light to the northeast and tried to attract
attention with flares, with no success at first. Then they noted a boat coming
towards them, and indeed it was a fishing schooner out of Boston Massachusetts
named Grand Marshal. The survivors had been motoring and sailing towards land
for 38 hours and over 100 nautical miles.
The
skipper and crew of the Grand Marshal took the 28 Allied sailors to Shelburne
that afternoon. Grand Marshal, owned by United Fisheries of Gloucester had a history of its own, and was cited proudly
in W.M.P. Dunne’s 1994 study Thomas F. McManus and the American Fishing
Schooners: An Irish-American Success Story, published by the Mystic Seaport Museum. In 1935 the Grand Marshal was sailing
from Provinetown, Cape Cod, under Captain Simon Theriault and was fishing Nova
Scotia, per a Gloucester fisherman’s history website, http://www.downtosea.com/1901-1925/strayfsh.htm.
Another of her skippers was named Albert Grimes and he fished the Grand Banks
with her. There is a photo of the Grand Marshal cited from May of 1936 in
Provincetown at http://provincetownhistoryproject.com/PDF/mun_000_1178a-scrapbook-4-subject-index.pdf. 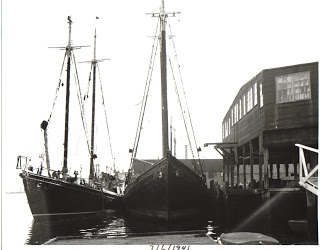 The caption for this photo on a recent blog is “United
Fisheries, F/V Grand Marshall to be converted to dragging, ’41 circa Larry
Colby Photo (This vessel became Capt. Frank Rose’s F/V Spring Chicken).”
Source: http://thegloucesterilove.blogspot.com/2009_06_01_archive.html
Posted by Mr. Ron Gilson on the blog “The Gloucester I Love,” on June 12, 2009.
The Grand Marshal is the vessel to the right in this photo dated 7 June 1941,
before the Alexandra Hoegh rescue or the re-naming.
The Swedish cook and
American mess boy were hospitalized for non-life-threatening conditions. The
other 26 men traveled to Halifax the next day, Saturday the 24th.
There the Norwegian consul as well as emissaries from Nortraship, the Norwegian
trade fleet overseas, met them and provided the sailors with clothes and accommodation.
That Friday, the 30th of January 1942 hearings were held at which
Captain Heian and a number of officers and crew were questioned.
According to Siri Lawson
of warsailors.com, survivors credited the rubber Vaco Suit, designed in 1939 by
Norwegian Carl Dybberg (b.1888) with saving a number of lives and making the
otherwise miserable and freezing cold passage in an open boat survivable. The
suits were required by Nortraship, which ordered roughly 30,000 of them aboard
their thousand or so ship.