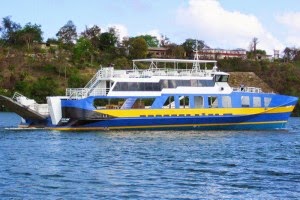 MAILBOAT NAME: M/V Sealink
PAST NAMES:
DIMENSIONS: 137′ long, 49′ beam, a Ro/Pax or Roll-on, Roll-Off, Passenger ship, capable of carrying 250 passengers and 32 vehicles, as well as 14 X 20-foot equivalent containers. Daewoo engines. Speed 18 knots. 273 gross tons, 350 deadweight or cargo carrying capacity in tons.
CONSTRUCTION: aluminum. IMO # 9229104.
YEAR BUILT: 2000
EARLY CAREER: traded in Bahamas since it was launched
BAHAMAS CAREER: Per the published schedule, Bahamas Ferries vessels call at North Eleuthera, Governor’s Harbour in central Eleuthera, Freeport, Andros, Exuma, Long Island and South Abaco. http://bahamasferries.com/wp-content/uploads/2015/03/BF-Summer-1-Apr-9-Jun-25-2015.pdf
CAPTAIN: not known
FATE: still in operation
OWNERS: Bahamas Ferries, Potter’s Cay, Nassau, NP, Bahamas
NOTES: I’ve ridden aboard the Sealink in the summer of 2013, after the loading and unloading had moved from central Sandy Point. I understand from subsequent visits to Sandy Point (lately in March 2015) that the downtown service was a mixed blessing, with a sudden influx of visitors providing revenue but also congestion, traffic and “culture shock” to some degree. Now, in order for motorists to visit Sandy Point after arriving at the new facility, they would have to deviate to the southwest and away from Marsh Harbour and settlements to the north.
As a personal footnote, as the father of a then-five-year-old, the absence of a child-proof railing by the starboard quarter, where the steps lead to the accomodation – towards which kids naturally run when playing, terrified me. I hope the situation has been rectified and will keep you posted.
In August 2012 near Highbourne Cay the Sealink ran aground and took on water on the 18th about 12:30 am, however was able to continue on its way.