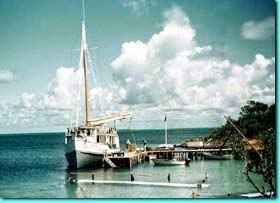 M/V Patricia K. as the M/V Old Horse Eye in Abaco in the 1950s.
Source : http://www.davegalebooks.com/almostwreck.html – Please purchase one of Dave’s books.

MAILBOAT NAME: M/V Old Horseeye ex-Patricia K
PAST NAMES: M/V Patricia K
DIMENSIONS: 74′ long X 19′ wide X 6.6, 81 net tons, 97 gross tons, 165hp, said by Anne & Jim Lawlor in “Harbour Island Story” to be 87′ long, perhaps overall. British flag. Per the photos, is a mix of both sail and engine power. Powered by a “Jimmy 6.71 engine.” Official # 157688.
CONSTRUCTION: wood
YEAR BUILT: 1930
BUILDER: T. Berlin Albury, Dunmore Town, Harbour Island
EARLY CAREER: traded in Bahamas since it was launched
BAHAMAS CAREER: plied mostly between Nassau and Miami, also touching Abaco, Eleuthera.
CAPTAIN: Captain Percy Sweeting in 1956, who was also the owner, from Harbour Island.
FATE:
OWNERS: Originally owned by Kelly’s Lumber Yard, Kelly’s Limited, as it was commissioned by Allan H. Kelly and named after his daughter Patricia. Later owned by John Percy Sweeting, Nassau after 1940.
NOTES: A great debt is owed to my friend Dave Gale of Abaco for the details of this story. His article in “Southern Boating” Magazine can be found in full
at http://www.davegalebooks.com/almostwreck.html

Here is Dave’s description of her: “In 1956 she was leading an equally hard life as an inter-island freighter, smelling of old wood, flaky paint, and diesel fuel. Her helmsman turned her wheel in the protection of a pilothouse, perched tugboat style, at her bow. She rolled, but she didn’t heel. Her helmsman could not hear her bow wave because of the insistent diesel engine that plunged her headlong into each wave without a care for easing her over it, and its throb was felt as well as heard throughout her hull. The vibrations worked their way up through the helmsman’s feet and occasionally set a wheelhouse window to sympathetic rattling. She had a Jimmy 6-71 engine and box-like cabins built all over her, except amidships over the hatch of her main hold.: 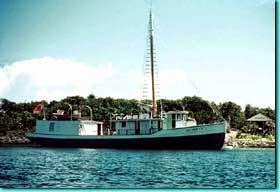 He continues in part: “She had the curious name of Old Horse Eye, and as a Bahamian boat, it was easy to assume she’d been named for the Horse Eye Jack. The prolific Jack family of fishes include Passing Jack, Blue Runner, Goggle-eye, Jack Crevalle, Amberjack, and others. But I had the feeling that she wasn’t named after a fish at all, for Bahamians don’t refer to a fish as “old” or “young.” They’re large or small and sometimes fat, but never old or young. That may have been her name before her Bahama life, and it may have referred to the eye of some old horse. It’s beyond me. She was owned by our friend Captain Percy Sweeting from Harbour Island, Eleuthera, who had a charter with a hardware and lumber company to carry freight from Miami to Nassau.”