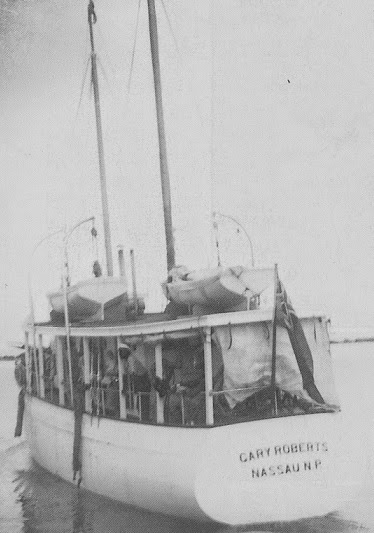 The Gary Roberts, from “The Harbour Island Story,” by Anne and Jim Lawlor, page 52, MacMillan Caribbean, 2008
MAILBOAT NAME: M/V Gary RobertsPAST NAMES: not known – named after Sir George William Kelly Roberts’ son Gary William Kelly Roberts. There may have been two vessels of the name Gary Roberts, one built 1942 and the other built 1957.DIMENSIONS: 66′ long overall (also called 70′), 16.5′ wide, 7.2′ deep, 50 net tons, 59 gross tons, 100 horsepower motor Note – boats by this name have several numbers: IMO 5126469, 199413, and 174290, which is confusing. She was fitted with a Cooper-Bessemen diesel engine according to “The Harbour Island Story,” page 151, by Anne and Jim Lawlor.CONSTRUCTION: not known, presumably since she was built in Harbour Island, built of wood
YEAR BUILT:1942, although this may be the year she was flagged to the Bahamas, as sources say her keel was laid on Jan. 7, 1940 and others say she was built in 1942.
BUILDER: Earl and Gerald Johnson of Dunmore Town, Harbour Island, Eleuthera, Bahamas
EARLY CAREER: not known
BAHAMAS CAREER: owned initially by Edgar L. Rolle of Lowe Sound, Andros, then by Sir George W. K. Roberts of Nassau. As part of the fleet in the Richard Campbell Limited company she plied from Nassau and Andros with mail and freight.
CAPTAINS: not known
FATE: said to have been lost, sold or scrapped on October 5th, 1978.
OWNERS: Sir George William Kelley Roberts, Harbour Island, Bahamas, before him Edgar L. Rolle, Lowe Sound, Andros
NOTES: There are three mailboats in Bahamian History named after Sir George W. K. Roberts’ sons: The M/V Richard Campbell, the M/V Gary Roberts, and the M/V Noel Roberts.

Sir Roland Symonette’s son Craig recalls having to re-fit the GARY ROBERTS in Nassau thus:
“Yes I can well remember The Gary Roberts. When we dry-docked her she had a “hog” in her keel which required us to set the middle keel blocks almost 8 inches higher then at either end. Her shaft was 24 feet long and we had to break the muff coupling as well as the coupling at the clutch base as she changed hull shape so much. Upon launching we would have to wait approx 24 hours for her to take back her hull shape in order to realign her shafts.”

The following biography of Sir George W. K. Roberts was found at http://www.wikitree.com/wiki/Roberts-10989:

“George William Kelly Roberts, born in 19 Jul 1906 in Harbour Island, Eleuthera, Bahamas, was the second child of George Campbell Roberts (occupation: Mariner) and Nellie Maud Kelly.[1][2].
He married Freda Genevieve Sawyer, daughter of Richard W. Sawyer on January 7th 1929 at Trinity Wesleyan Church in Nassau. Their marriage certificate was witnessed by Allan Roberts and Winifred Lightbourne. At the time of the wedding he lived on Bay Street and was a merchant, and Freda Genevieve Sawyer lived on Victoria Avenue.[3]. They had three sons: Richard Campbell Roberts, Gary William Kelly Roberts, and Noel Sawyer Roberts.
He was a member of the House of Assembly from April 4th 1935 to January 13th 1955, and a member of the Executive Council from Jun 1st, 1946 to July 22, 1954. He was a leader of the Government in House from 1949 to 1954 and president of the Legislative Council in 1954. He served as the first president of the Senate from January 7th, 1964 to June 24th, 1964.[4] On January 1st, 1958 he was knighted Commander of the Most Excellent Order of the British Empire (C.B.E.) for his public services in the Bahamas.[5]. In 1950’s or early 1960’s he and his family moved from their Village Road residence to “Lucky Hill,” one of the most elegant home and gardens on Eastern Road, just east of Dick’s Point Road.[6] He died June 24th 1964 Nassau, Bahamas and is buried on the grounds of the Sir George WK Roberts Memorial Library in Dunmore Town, Harbour Island, Eleuthera, Bahamas.“
Sources: Mrs. Eldwyth and Danielle Roberts of Abaco, relatives of Sir George W. K. Roberts also wikitree as cited above.
“The Harbour Island Story,” page 151, by Anne and Jim Lawlor