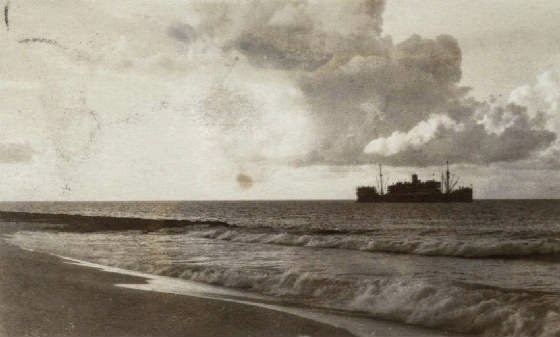 MAILBOAT NAME: S.S. Munargo PAST NAMES: DIMENSIONS: BUILDER: New York Shipbuilding Corporation, Camden, New JerseyYEAR BUILT: 1921EARLY CAREER: BAHAMAS CAREER: served Nassau and possibly other islands like Long Cay with international mailCAPTAINS: not known but during WWII it was Commander Harold F. ElyOWNERS: Munson Steamship Line – also owners of the Royal Victoria and British Colonial hotels in Nassau. Cora Munson, wife of the Frank Munson, was originally a “Mallory of Mystic”FATE: Sold in 1938 due to the effects of the Great Depression. Converted to a troop carrier then a hospital ship for the US Army:  “USS Munargo (AP-20) was a commercial vessel-class transport acquired by the U.S. Navy for service as a troop carrier during World War II. She operated in the Atlantic Ocean, and, during the war, she was converted into a U.S. Army Hospital ship and renamed Thistle. Munargo (AP 20) was completed in December 1921 by New York Shipbuilding Corp., Camden, New Jersey; acquired by the Navy from the Army 6 June 1941; and commissioned 4 June 1941, Comdr. Harold F. Ely in command.” Source: http://en.wikipedia.org/wiki/SS_Munargo

She was scrapped in 1957 after providing post-war repatriation services in the Pacific Ocean 1945-1947.
NOTES:

“The depression resulted in severely reduced traffic and ….Munson Line ran into financial troubles its ships were either laid up or scraped. The MUNARGO was transferred to a tourist service Miami, Nassau, Havana in 1937 but sold a year later when the company went bankrupt. The remaining passenger ships were taken over by the Maritime Commission.”

See also http://maritimematters.com/2010/07/munson-steamship-line/ for the following about the Munargo:
A more detailed image of the Munargo, apparently taken in New York Harbor
Source: http://www.photoship.co.uk/JAlbum%20Ships/Old%20Ships%20M/slides/Munargo-01.jpg