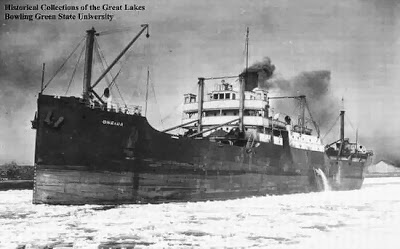 The 2,309-ton American steam ship Oneida was built in 1920 by the Detroit Shipbuilding Company of Detroit Michigan. Here first owner was the Independent Steamship company of Detroit, which then sold her to the Ford Motor Company of the same city in 1924. After that her operators were the Lykes Brothers Steamship Company. Her dimensions were 76.5 meters long, 13.3 meters wide, and 6.8 meters deep. A single triple-expansion engine of 265 n.h.p. drove the ship at nine knots.

For her final voyage the Oneida discharged a cargo of rice in San Juan Puerto Rico which she had loaded in Lake Charles, Louisiana in early June. Here charterers were the United States Government, presumably through the US Maritime Commission. Her master was Captain O. A. Johnson and his crew were 29 officers and men. There was no armed guard as the ship was unarmed. All the crew were American.

Oneida arrived in San Juan on the 4th of July and departed on the 7th for Punta Gorda, also called Moor’s Bay, Cuba in ballast to load another cargo. Her course would take her across the Windward Passage to the west. On the afternoon of the 13th of July she was just passing the western edge of the Windward Passage (after what appears to have been a very slow passage) and was only five or so miles from Cape Maysi, the northeastern tip of southern Cuba.

That day the weather was fine and clear, with a moderate sea and gentle breeze from the east. The ship was steering 310 degrees true, or northwest at 10 knots. There were two lookouts, on the pilot house and the port bridge wing. The torpedo struck ten minutes after the midday change of watch. The Master saw it approaching 300 feet off the starboard side, but it was too late to maneuver out of the way.

Hans-Gunther Kuhlmann in U-166 had aimed his shot well – a full twenty percent of the starboard side of the freighter was blown away, and she began to sink by the stern rapidly. U-166 was estimated to have been at right angles to the starboard side. There was no time to send an SSS or SOS signal. All four life boats were shattered by the blast. Soon after the attack the submarine surfaced amongst the rafts. A German sailor dressed in white shorts, a sweater, blue hankerchief and sailor’s hat plucked a life ring out of the water with a boat hook. Kuhlmann kept the boat on the surface for a bold quarter of an hour before it headed northeast.

Six of the men were drowned during the attack or the subsequent abandonment. Twenty three managed to get away on two rafts. Sixteen settled on one raft and seven on another. They were clear of the ship by 12:12, and Oneida is said by the captain to have sunk the same minute – two minutes after being struck. Once they were sure there were no other survivors they started paddling towards the shore.

Thirty minutes after the sinking, about 12:45 pm, a US Navy patrol plane appeared and circled the survivors. The pilot or his navigator dropped instructions for the men to proceed to Cape Maysi, which was by then visible three miles away. About four hours after floating free the men were able to land five miles west of Cape Maysi. From there they managed to walk to the Cape Maysi lighthouse along the shore. At the lighthouse they were able to arrange for the Cuban schooner Zoila to carry them to Baracoa, Cuba the same afternoon.

Carey had an interesting follow-up story inasmuch as he arrived uninvited at Fourth naval District Intelligence Office on Juniper and Walnut Streets, Philadelphia. Aged 38 and from Dover Delaware, he said he had not been interviewed with other officers in Guantanamo Bay Cuba and volunteered to make a statement about the loss of the Oneida. So Lieutenant E. M. Rhea, USNR dutifully made a report. In the report he said the Captain was F. W. Deal. He gave details of the ship’s prior itinerary and otherwise corroborated and amplified information already given.

The Captain was listed a O. A. Johnson, not Walter Franklin Deal as reported in other sources. There was another ship named Oneida lost to weather later in the year (off the Virginia capes on the 4th of May 1943) which has caused some confusion regarding the loss of this ship.