U-Boats New England: Fort Binger     Free French flag, Source: revolvy.com/main/index               The steam ship Fort Binger was ordered in July of 1917 and delivered by shipyard Craig, Taylor and Company Limited of Stockton-on-Tees, UK in June 1919. In 1942 at the time of this attack she was owned by William Thompson and […] 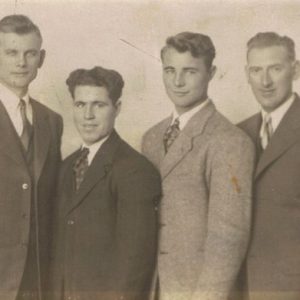 U-Boats New England: Cornwallis     SS Cornwallis under her previous name of Canadian Transporter. Source: State Library of New South Wales, Australia. uboat.net/allies/merchants/ships/3382.html             The Cornwallis was a steam ship of 5,458 gross tons which was the 20th ship built by J. Coughlan and Sons of Vancouver, BC. Originally from launch in 1921 her […]

U-Boats New England: Cherokee   SS Cherokee, showing the side where two torpedoes from U-87 struck her in June, 1941. Courtesy of the Rich Turnwald collection, Source: uboat.net/allies/merchants/ships/1818.html             The loss of the steamship Cherokee in convoy off Cape Cod is remarkable as the casualty with the most deaths of any loss in New England […]

U-Boats New England: Black Point   SS Black Point as the Fairmont, from the US Navy Historical Center Photograph #NH70454. Source: http://www.uboat.net/allies/merchants/ships/3509.html               The coal carrying steam ship Black Point was built at the New York Ship Building Corporation of Camden NJ in 1918 as the Fairmont for Coastwise Transportation Incorporated of Boston. The […] 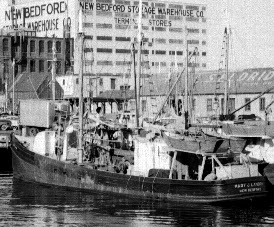 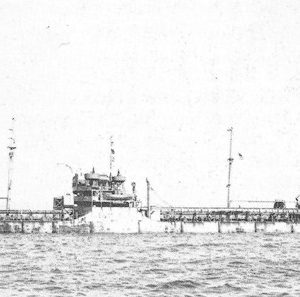 U-Boats New England: Atlantic States     Atlantic States, US-flagged tanker. Source: The Mariner’s Museum, Newport News VA, http://www.uboat.net/allies/merchants/ships/3484.html The steam turbine-propelled tanker Atlantic States was built by the Sun Shipbuilding and Drydock Company of Chester, Pennsylvania in 1943. She was ordered in January 1941 and owned by the Atlantic Refining Company of Philadelphia, which […]

U-Boats of New England: The Angelus   The Angelus, showing her square-rigged masts up forward and the fore-and-aft rigged mast aft. Source: http://www.uboat.net/allies/merchants/ships/2932.html   The Angelus was a large sailing barkentine (bark or barque) built in France which was over 338 gross registered tons and sported three large masts and a bowsprit as long as most […]

U-Boats in New England Starting weeks after Hitler declared war on the United States, 73 German U-Boats sustainably attacked New England waters, from Montauk New York to the tip of Nova Scotia at Cape Sable. More about this book… U-Boats in the Bahamas The untold story of over 250 men who made it ashore in […] 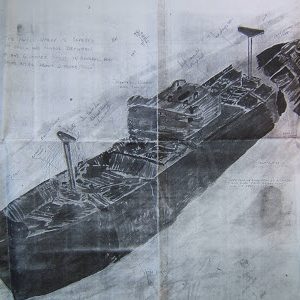 U-Boats New England: Alexander Macomb A drawing of the wreck of the Alexander Macomb on the seabed by salvor Roy V. Martin, from http://www.wrecksite.eu/wreck.aspx?18562.             The Liberty Ship Alexander Macomb displaced 14,245 long tons and weighed 7,179 gross tons. Built by Bethlehem Steel’s Fairfield Shipyard in Baltimore for the US Maritime Commission, the ship had […]

U-Boats New England: Aeolus Ben and Josephine at her launch at Morse in Thomaston Maine in March 1941.              The fishing vessel Aeolus was 41 gross registered tons, a dragger with a schooner rig and auxiliary motor. Her captain and owner was John O. Johnson, an unlimited tonnage master. The vessel was built in 1922 […]