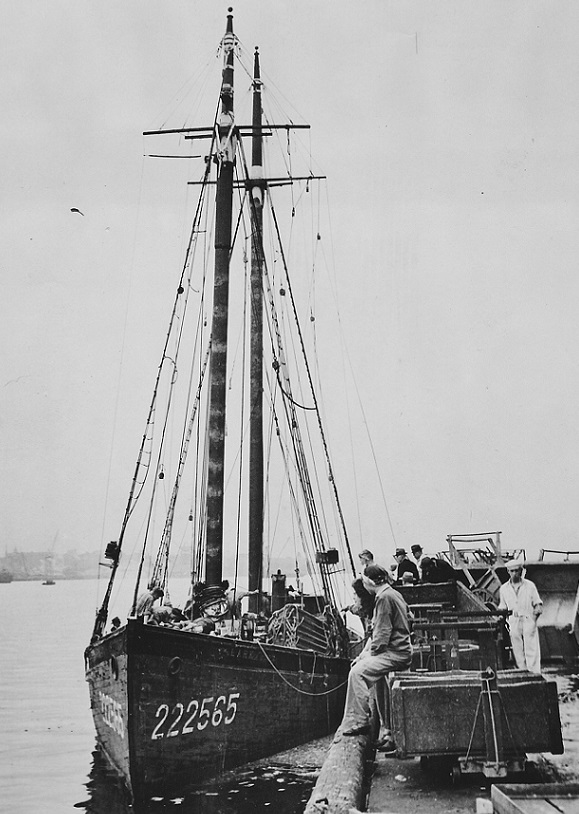 The fishing schooner Lark in Boston Harbor following its attack, which made national news.
Source: Author’s collection.
The fishing schooner Lark was built in 1922 in Newcastle, Maine. It was 148 tons and owned by F. J. O’Hara Brothers Company of Boston, Massachusetts. This was a famous family with a dynasty of design, construction, ownership and management of fishing vessels in the Gulf of Maine and beyond. At the time she was attacked off the Nova Scotian fishing banks her captain was James L. Abbott, aged 35 of Dorchester MA, and her cook Daniel Maloney, aged 74.
The vessel was an unarmed line trawler, equipped with a handful of dories which were stacked together on deck. These were operated by teams of fishermen equipped with barrels filled with lines with hooks spaced along them. It was grueling work, with dories periodically being separated from the mother vessel in the fog and rough seas, with tragic results.
Her crew consisted of 25 sailors and fishermen, Captain Abbott and Cook Maloney. Of these, 14 were Americans, 11 Canadian and two were from Portugal – possibly the Azores. They left Boston on the 5th of June for the fishing grounds off Nova Scotia. On the morning of the 13th of June, 1944 the Lark was laden with 50 tons (105,000 pounds) of mixed ground fish, and was moving from the La Havre Banks off Nova Scotia to the fishing grounds off Seal Island, NS, then back to Boston. She was not under sail but rather operating her diesel. Less than an hour before dawn she was 32 miles southeast of Cape Sable Light. The schooner’s course was northwest, and she was making eight knots over smooth seas with clear visibility. She held a straight course, no zig zagging, there was a bit of residual light from a waning moon, and the wind was a slight five knots from the west-southwest.
Probably the schooner’s motors alerted Volker Simmermacher of U-107 to her presence, as at 5:55 am, under cover of darkness he fired a torpedo at the schooner from the German submarine. It missed. Not one to give up easily, Simmermacher tried again at 6:15 am, only to have his second expensive projectile go to waste as well. This was almost certainly the result of the low draft, or small underwater target of the schooner as compared with larger ships a submarine would usually encounter. It is possible that U-107 targeted Lark based on efforts by the US Navy to equip fishing boats with radios enabling them to send in U-boat sightings to shore, which at the same time made fishing boats the enemies of U-boats. After all, U-boats were just as capable of hearing radio transmissions from fishing vessels are shore stations were. Indeed the Lark was provided with, and carried, a “confidential fisherman observer kit” as well as a nominated observer. A detailed report describing the submarine – conning tower, condition and color of paint, location and relative strength of guns, configuration of bow, etc. – was later submitted to the US Navy.
At 6:30 am, a quarter hour after the second failed torpedo attack, Simmermacher brought U-107 to the surface off the starboard quarter, or flank of Lark and fired a single warning shot. Engines were stopped and no evasive our counter-attack measures were taken. Immediately all 25 fishermen except Captain Abbott and Maloney abandoned ship what the navy described as “good order” in five small dories. Then for the next 40 minutes the U-boat gunners rained fire on the wooden schooner with their 3.7-centimeter and 2-centimeter machine guns.
Missiles of various sizes from this fusillade struck the hull, sails, pilot house, rigging, and fishing dories stacked on deck. Presumably Abbott and Maloney stayed below, as neither man was injured. U-107 is said to have fired from roughly 600 feet away, circled the Lark whilst firing, and left the scene briefly and returned. However after the sun rose at around 7:10 Simmermacher decided he had had enough, or at least expended enough effort on Lark. He took U-107 close to the fishing dories as well as the schooner without hailing anyone in them. Then at 7:12 am the sub submerged and headed off in a southeasterly direction, towards deep water.
By 10:15 am the men in the five dories were all back on board their mother ship. By then Captain Abbott and Maloney had re-started the diesel and retrieved them. On the way back to Boston, at 1:57 pm the same day, Abbott reported to shore via radio that his vessel had been attacked, circled and fired upon by a surfaced German U-boat. This report was immediately logged and passed to the Commander, Eastern Sea Frontier in New York. There were reported to be at least five shell hits on the schooner, damaging the pilot house, the hull above the waterline, and both the main and riding sails. Lark returned to Boston at 4:32 am on the 15thof June.
One of Lark’s officers or crew – possibly Captain Abbott himself – shows off an oar.
Source: Author’s collection.
The attack was difficult to hide, inasmuch as the battered schooner tied up at a Boston wharf and 27 men were involved and survived to tell their tales. The navy thus notified and coordinated their public relations officer who liaised with the press. One story, titled “Victim Reveals Presence of Sub off Northern US,” was published by the Washington Daily News on the 15th of June 1944 and the clipping was retained by the US Navy in their file on the casualty, along with dozens of detailed photos and captions describing the damage. The navy were careful to point out that it was the first time in two years that enemy subs had been sighted on the northeast fishing banks.