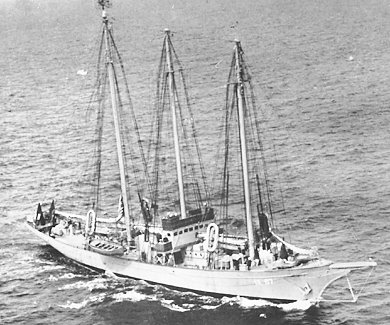 A rare image of the USS Guinevere in her naval colors. You can tell from her maneuverability and low freeboard that it would have been a good ship to retrieve lifeboat survivors from.
Source: Navsource.org, http://www.navsource.org/archives/09/46/46067.htm
The action report filed by Bergin shows that he first learned of the casualty at 11:30 PM on the 5th of April, and headed for the given location, which was off by a dozen or so miles. However they were able to follow the activity of aircraft and the tanker itself which was letting off flares that were sighted by Bergin and his men at 50 minutes after midnight on the 6th. By that point the winds had risen to 40-45 knots, visibility was ten miles, the seas were rough, and the temperature was 33 degrees Farenheit.
At 1:21 am they sighted the ship’s lifeboats and Bergin maneuvered the 195-foot, 503-ton, 32.6-foot-wide and 15-foot-deep Guinevere alongside lifeboat #4 at 1:25 am and managed to collect al 35 men without injury or death, quite a feat of seamanship. Then they cut the lifeboat loose. Seven minutes later the naval ship was alongside #3 lifeboat and retrieved 11 survivors in less than four minutes. By 2:05 Guinevere was alongside boat #2 and took on six additional survivors, without losing any of the 52 men entrusted to the boats by Captain Lindemuth, though there were admittedly some “minor injuries only.”
Ten minutes later, at 2:20 am Bergin and the Guinevere were placed in charge of the overall rescue and guard operations around the Atlantic States. At 2:43 they sighted the tanker “down by the stern listing to starboard, with 3 feet of free board showing.” By then she was 17.5 miles from Cape Cod. Two minutes later Bergin ordered all small craft in the vicinity to “form a protective screen around torpedoed ship.” Six minutes later, at 2:51 am “ComCortDiv 35 arrived at scene of action and relieved USS Guinevere as Officer-in-Charge at scene.”
At 4:40 am Guinivere was wisely ordered to peel off from the scene and return the survivors to the warmth of shore. Escorted by the Submarine Chaser SC 1280 she did so, leaving at 4:47 and arriving at 1:07 pm that day, no doubt exhausted and cold. By 6:02 am on the 6th Lt. Bergin was able to inform his superiors at the command center of the Eastern Sea Frontier that their ETA in Boston with the survivors was 12:30 am and that one of the salvage tugs had a line onto the stricken tanker. He added “no one injured and ship appears in fair condition.” The Guinevere docked at US Naval Frontier Base’s Pier #1 in East Boston and disembarked the tanker’s survivors ashore just after 1 pm.
At 4:01 pm on the 6th of April the USS Mayrant was towing the Atlantic States at 3 knots. It was advised that this set-up be maintained as “tugs do not have power to hand job in this strong wind,” adding, “boarding party reports tanker Atlantic States had large hole about 10 feet in diameter at and below waterline near stern. This undoubtedly must have been caused by a torpedo.”
At 5:16 pm the same day it was reported that six naval vessels or a mixture thereof were screening the tanker, and that four of them were deemed “small and rather ineffective under present wind and sea conditions.” It was suggested to release the USS Schenck and to add two destroyer escorts or destroyers to reinforce the screen. By 5:08 pm a tug had the tanker in tow and by roughly 6 pm on the following day, the 7th of April the Atlantic States was berthed back in Boston, where ultimately she was dry-docked, repaired, and returned to service.
On 22 May 1945 Lieutenant Bergin was recommended by his commanding officers for a Letter of Commendation with the authority to wear the Commendation Ribbon. The Guinivere was transferred to the US Maritime Commission on 25 April 1945 for disposal and her final fate is unknown.
U-879 was tracked down and sunk off Capt Hatteras roughly three weeks later, on 30 April 1945 by depth charges from the USS Natchez, USS Coffman, USS Bostwick, and USS Thomas. All 52 German sailors on board perished. Atlantic States traded under the ownership of Winco Tankers Inc. until February of 1961, 20 years after she was ordered, after which she was scrapped in Hong Kong. Born on the 21st of May, 1908, Captain Lindemmuth lived until the 7thof April, 1970.
As a footnote, the report on this casualty by the US Navy was signed by Lieutenant (Junior Grade) Barbara Conard: out of the more than 250 survivor statements this author had read from World War II, this is the first and so far the only report filed by a female officer.