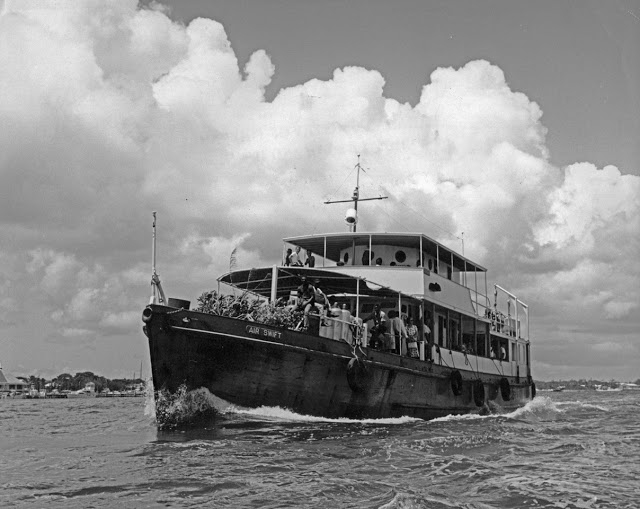 My favorite mailboat image: the AIR SWIFT a former fast US Navy submarine chaser from WWII seting off from Nassau Harbor to promising new ports, laden with cargo, passengers and crew or all backgrounds, on a clear calm and sunny day. This is from David Gale of Abaco, author of BELOW ANOTHER SKY – A Bahama Memoir. Note the deck house / wheel house on the top deck as well as the flag staff on the front, the chock in the center of the bow, the tired ready for docking, the name board on the front port bow, lifeboat davits on the stern, gas cylinders on the port side, and large airy portholes. In shipping we say the boat has a ‘bone in its teeth’ since there is white foam around the bow as she slices through the water, appearing to give the vessel a mustache….

For a detailed account of this mailboat with several illustrations, see July 5, 2015 entry at http://mailboatsbahamas.blogspot.com/search?q=air+swift 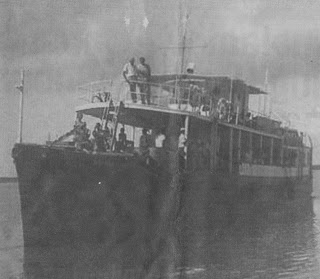 This image is a photo of a photo from the TRIBUNE, an article by historian Jim Lawlor in August 31, 2013. The quality is poor and the boat is barely moving, preparing to dock it appears. Not as dramatic as the one on top.

CONSTRUCTION: wood
YEAR BUILT: keel laid 7 Nov. 1942, launched 18 Sept. 1943, commissioned 4 Dec., 1943
BUILDER: Walter E. Abrams Shipyards, Thomas Knutson Shipbuilding Corp., Halesite, Long Island, New York, USA
EARLY CAREER: After the US Navy and US Coast Guard put on the Nassau-Eleuthera mail run
BAHAMAS CAREER: Nassau – Eleuthera mail run before the Bahama Daybreak and past 1950
CAPTAINS: not known
FATE: in May 2014 reader Jeff Albury wrote that the Air Swift was lost off Six Shilling Channel, between Current Island and Rose Island, which connect New Providence and Eleuthera. Date and circumstances not known, but he said his dad showed him wreckage when they were conching in the channel years ago.
OWNERS: not known, presumably Nassau or Eleuthera business interests

UNDER ANOTHER SKY – A Bahama Memoir, by David Gale: Bahama Memoir. Island living – a dream of the many and an achievement of the few… Pseudo-aquatics live at the edge of, in and out of, but not actually in the water. That defines Dave and Phoebe who bought the uninhabited five-acre Parrot Cay, near Hope Town, from the Queen of England, forty-five years ago. After a rough start in the hotel business they created Island Marine, renting small boats and cottages, and diving. If you enjoyed Dave’s first book, Ready About, you’ll surely enjoy this funny, informative and entertaining memoir with more than 150 photos about Dave and Phoebe’s unique life and times on their island in the Bahamas.