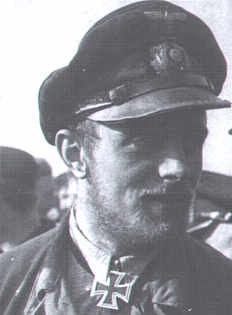 Oberleutnant zur See Otto Ites of U-94 who patrolled New England for 5 days in March 1942. Photo courtesy of http://uboat.net/men/ites.htm
Oberleutnant zur See(later Kapitänleutnant) Otto Ites brought his charge U-94 into the New England region from south of Cape Sable Nova Scotia on the 5th of March westbound to a point south of Montauk New York on the 9th. The submarine sank no shipping there.
On the way to the zone U-94 dispatched the Empire Hail on the 24th of February and the very day that he passed Montauk to starboard heading west Ites sank the Brazilian ship Cayru on 9th March. These he followed by sinking the Norwegian Hvoslef and damaging the Imperial Transport on the 11th and 25thof March respectively.
Otto Ites was born in February 1918 in Norden and survived the war, living until age 63 in 1982. This despite the fact that U-94 was bombed by aircraft and rammed by the Canadian corvette HMCS Oakville in the Windward Passage, with only 19 German sailors surviving and 26 perishing.
Ites was a member of the Crew of 1936, doing time aboard the torpedo boats Albatros and Kondor, then joining U-Boats in 1938. He served aboard U-51 then as 2nd Watch Officer on U-48 along with Reinhard Suhren. From March to August 1941 Ites commanded U-146, then took over U-94 from Herbert Kuppisch.
Captured after the sinking of U-94 in the Caribbean, Ites was released in 1946, was a dentist, then joined the new German navy a decade later, commanding the destroyer Z-2. He retired as Counter Admiral in 1977 and died five years later.
SOURCES:
Busch, Rainer and Röll, Hans-Joachim, “German U-Boat Commanders of World War II, A Biographical Dictionary,” Greenhill Books, London and Naval Institute Press, Annapolis, MD, 1999
Helgasson, Guðmundur and Kolbicz, Rainer, www.uboat.net, 2015
Högel, Georg, “U-Boat Emblems of World War II 1939 – 1945,” Schiffer Military History, Atglen, PA, US, 1999
Kurowski, Franz, Knights of the Wehrmacht, Knight’s Cross Holders of the U-Boat Service,” Schiffer Military/Aviation History, Atglen, PA, US, 1995
Mason, Jerry, www.uboatarchive.net – for the KTB or war diary of this patrol, 2015
Niestlé,Axel, “German U-Boat Losses During World War II – Details of Destruction,” Naval Institute Press, Annapolis, MD