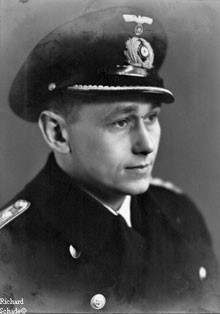 Dietrich Lohmann who brought U-89 on a 16-day patrol to New England waters in July and August 1942. Photo courtesy of http://uboat.net/men/commanders/747.html
Kapitänleutnant (later Korvettenkapitän) Dietrich Lohmann brought his command U-89 on a complex 16-day incursion into New England waters between the 1st of July and the 3rd of August 1942. During the patrol he sank the small Canadian fishing schooner Lucille M. without loss of life on the 25th of July.
U-89 entered New England waters some 300 miles south of Cape Sable, Nova Scotia on the 1st of July heading westwards. It continued on that course for 3 days and exited the region about 200 miles south of Montauk New York on the 3rd. Then on the 18th the submarine returned to the region, starting well south of Montauk and heading northeast for two days from the 18th to the 20th of July.
For nearly two weeks Lohmann circled around southwest of Cape Sable, looking for prey. In the first week their thirst was at least partially slaked by encountering the small Lucille M. about 75 miles southwest of the cape. Then the U-boat headed east and out of the region on the 27th of July. The third and final incursion occurred between the 1st and 3rd of August, when U-89 returned briefly from south of Cape Sable westwards for a day, then back southeast and out of the area, heading back to Europe.
The Lucille M. was a 54-ton motorized fishing vessel owned either by Frederick W. Sutherland of Yarmouth or the Swim Brothers of Lockport, both in Nova Scotia. Her captain was Percy Richardson and she was fitted on her final voyage for swordfishing on the George’s Bank – visibility being good for that fishery at that time of year. There were 11 men including Richardson on board when they decided to try Brown’s Bank en route to George’s Bank. They were on the southern tip of Brown’s Bank when U-89 caught up with them.
Just before dawn the fishermen heard the deep-throated thrum of the U-boat surfaced and charging its batteries. At about 3 am the Lucille M. loomed out of the mist and within sight of the submariners. Lohmann opened fire on the defenseless fisherman, wounding four of the men. The Germans flung 20 flammable (incendiary) and 15 high-explosive rounds from their deck gun into the 75-foot long schooner from their deck gun (Uboat.net).
The first shells hit the sails and the top hamper of the schooner. The 11 men scrambled into a lifeboat and managed to row to Shelburne, Nova Scotia (Wynn said Clarke’s Harbour), a voyage of some 70 miles. They said they could hear the Germans reloading their guns, hear the empty shell casings hit the deck, and the submariners swearing. Wynn writes that “Lohmann had expressed regret in good English, but they should understand that he was only carrying out orders.” (Vol. 1, p.68).
This patrol began in Brest France on the 6th of June and ended there on the 21st of August, 77 days later. At the outset of the patrol U-89 and seven other U-Boats formed a line called Endrass off Spain to intercept Convoy HG 84 on the 14thand 15th of June, and five ships were sunk from the convoy, none by U-89. U-460 then refueled U-89 west of the Azores Islands. After the Lucille M. incident Lohmann patrolled off New York. It sank no ships during the patrol. On the 16th of August U-89 was attacked near the Azores by a Liberator aircraft under T. M. Bulloch from 120 Squadron, but escaped (Wynn, Vol. 1, p.68).
Dietrich Lohmann was born in October 1909 and perished on 12 May 1943 at age 33 when U-89 was lost with all 48 men to a combined attack north of the Azores by a Swordfish airplane, HMS Broadway, HMS Lagan and HMS Biter. A member of the Crew of 1930 he sailed on the training ship Horst Wessel and in April 1940 joined U-Boats. He was a watch officer in U-99 the commissioned U-554 in January 1941, commanded U-579 and ultimately U-89 for a total of 5 patrols of 220 days (Uboat.net). He sank four ships of 13,815 tons and received no decorations.
SOURCES:
Busch, Rainer and Röll, Hans-Joachim, “German U-Boat Commanders of World War II, A Biographical Dictionary,” Greenhill Books, London and Naval Institute Press, Annapolis, MD, 1999
Hall, Captain Hubert of Overton, Yarmouth provided details of the Lucille M, see an article entitled “Meteghan built boat sunk by Germans during World War Two,” by Charlene L. and at http://www.novanewsnow.com/Business/2009-11-10/article-604167/Meteghan-built-boat-sunk-by-Germans-during-World-War-Two/1
Helgasson, Guðmundur and Kolbicz, Rainer, www.uboat.net, 2015
Högel, Georg, “U-Boat Emblems of World War II 1939 – 1945,” Schiffer Military History, Atglen, PA, US, 1999
Kurowski, Franz, Knights of the Wehrmacht, Knight’s Cross Holders of the U-Boat Service,” Schiffer Military/Aviation History, Atglen, PA, US, 1995
Mason, Jerry, www.uboatarchive.net – for the KTB or war diary of this patrol, 2015
Niestlé,Axel, “German U-Boat Losses During World War II – Details of Destruction,” Naval Institute Press, Annapolis, MD, 1998