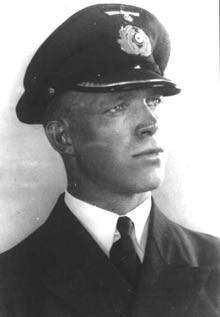 Friedrich Steinhoff, who
brought U-873 to New England in order to surrender in Portsmouth, NH on May 17th
1945. Photo courtesy of http://uboat.net/men/steinhoff.htm
Kapitänleutnant Friedrich
“Fritz” Steinhoff brought U-873 to New England on or about the 14th
of May 1945 in order to surrender his boat to the US Navy at Portsmouth, New
Hampshire, which he did on the 17th of May, two days after U-805
under Bernadelli. After Donitz’s order to surrender on the 4th of
May Steinhoff contacted the Allies via radio and was instructed to proceed to
Portsmouth (Wynn, Vol. 1, p.180).
Unusually Wikipedia is more
detailed than either Wynn or Uboat.net regarding U-873’s surrender. According
to https://en.wikipedia.org/wiki/German_submarine_U-873,
“U-873 sailed from
Kristiansand on 30 March 1945 and
was proceeding to an assigned operations area in the Caribbean Sea when Germany surrendered on 8 May. At 04:30 GMT on 11 May, U-873 surrendered to USS Vance of Escort Division 45
(CortDiv 45) while it was escorting convoy UGS 90 at 35°45′N 42°31′W. Vance placed a prize crew aboard U-873 and escorted
the U-boat to Portsmouth Naval Shipyard on 16 May.”

Some sources have the sub
arriving on the 17th of May, others at 2:30 pm on the 16th (Gray).
The distance from the position of surrender (SW of the Azores and roughly
midway between there and Bermuda), and Portsmouth is roughly roughly 1,500 miles and took 5.5 days to cover in
rough conditions. On arrival journalist Charlie Gray reported an unusual promise from a
POW, that “Fritz Steinhoff, captain of
the 305-foot U-boat 873, now already in harbor, announced that he would give a
press conference soon.” (Gray, see citation below, seahistorynh.com). 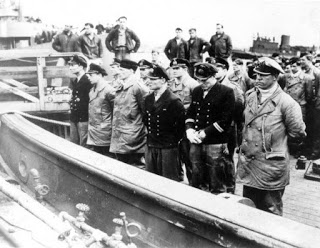 The original
caption, from desausa.com reads “German Submarine U-873 Crewmembers Surrender U-873
Commander, KPTLT Friedrich Steinhoff, standing front row, lst on right
(wearing turtleneck, hands behind back) U-873 was captured by USS Vance DE 387,
11 May 1945. I am only guessing, but this photo appears to have been taken
aboard U-873
after she arrived at Portsmouth, NH, 16 May 1945, as the crew was being taken
into custody. Photo courtesy of Joe Haberkern, son of Joseph W. Haberkern, Jr.,
MoMM2/C, Plankowner, Photo source: http://www.desausa.org/images2/uss_vance_capture/uss_vance_de_387_uboat_10.htm

Friedrich
Steinhoff was born in July 1909 and a member of the Class of 1935. At the time
of surrender he was 35. Before the war he was an officer in the German merchant
navy (Rust). From December 1939 he was a commander of the 4th
Minesweeping Flotilla and then of a coastal defense group in Bergen, Norway to
March 1941. From July 1941 he served as Watch Officer of U-96 to October 1941,
then in the 26th Flotilla’s commander’s course. He began workup for
U-511 in November 1941 and took over the boat in December 1941 until December
1942.

Since it is still somewhat
controversial, I will let Wynn describe what happened when Steinhoff, an
officer, was sent to the common jail in Boston:

“KL Steinhoff was
interrogated at the Navy Yard on missile-launching equipment on U-boats. He had
taken part in the submerged rocket-launching trials at Peenemunde in June 1942.”
This was in U-511. Note his brother was a scientist in rocket development with
the Luftwaffe. Ernst August Wilhelm Steinhoff immigrated to the US in November
1945 to assist American scientists with rocketry, was awarded by the US
government in 1958 and is in the International Space Hall of Fame – https://en.wikipedia.org/wiki/Ernst_Steinhoff.

Wynn continues: “A few days
after surrendering, Steinhoff committed suicide in Charles Street Prison,
Boston. It seems likely that he received the same sort of rough treatment as
that meted out to the men from U-546 on the same subject and probably by the
same American interrogation team.” Steinhoff is buried with a dozen or so other
Axis soldiers at Fort Devens, Massachusetts. 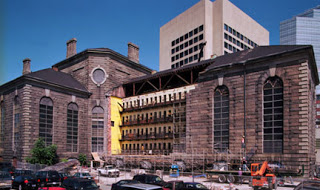 Charles Street Jail, built
c.1851 and in use in 1945 when Fritz Steinhoff of U-873 killed himself there,
has been converted to a luxury hotel on the Charles River, Boston (Liberty
Hotel, 2007, 300 rooms). Photo source: http://www.nerconstruction.com/charlesstreetjail.html

Uboat.net treats this
episode thus: “After suffering harsh interrogation, Friedrich Steinhoff
committed suicide on the morning of 19 May 1945, opening his arteries using
broken glass from his sunglasses. U-873‘s doctor, Dr. Karl Steinke, attempted to give
first aid, but was too late. Documents concerning the surrender of U-873 and
the interrogation of her crew can be found at uboatarchive.net.”
For Steinhoff’s death certificate, etc. see http://www.uboatarchive.net/U-873.htm.