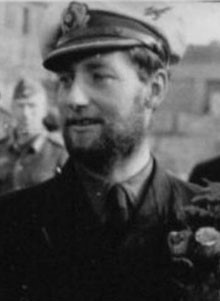 Joachim Berger after a patrol. In U-87 he patrolled New England extensively, mining Boston Harbor and sinking two ships out of a convoy off Cape Cod in June of 1942. Photo courtesy of http://uboat.net/men/commanders/74.html
KapitänleutnantJoachim Berger brought his command U-87 on a highly eventful 14-day patrol in New England waters which included the mining of Boston Harbor, sinking two ships off Cape Cod, and an attack and damage by aircraft off Cape Sable.
The patrol entered New England waters hundreds of miles south of Cape Sable, Nova Scotia on the 8thof June, after which U-87 motored west for two days until the 10th. At that point, well south of Montauk, New York, the submarine doubled back and headed north towards Nantucket Lightship.
It proceeded along the outside of Cape Cod Canal and on the 11th rounded Provincetown to port. During the night of the 12th of June the sub laid six TMC-type mines between 04:55 am and 07:10 am German time, off Boston Harbor. They are not known to have sunk any ships or been discovered, rendering their effectiveness as a weapon of fear and damage useless.
On the 13th of June Berger headed east and out of Massachusetts Bay to a point roughly 50 miles off Cape Cod. There, on the 16th, the Germans encountered southbound Convoy XB 25 en route to Boston from Halifax. U-87 managed to pick off two vessels from the protected convoy without being sunk herself. Her victims were the Port Nicholson and the Cherokee.
Port Nicholson was a British steamer of 8,402 tons en route from Avonmouth England to Wellington New Zealand via Panama with 5,600 tons of military stores and auto parts. She was attacked during a gale by two torpedoes which struck home. Two crew were killed by the 1sttorpedo. Captain Harold Charles Jeffrey and 84 men including gunners were taken off the stricken ship by HMCS Nanaimo (K 101).
At dawn the Port Nicholson was still afloat so Captain Jeffrey, two ship’s officers and three ratings from the Canadian corvette re-boarded her. The ship however went down by the stern quickly – too quickly for the men in the lifeboat, who were overturned and sucked into a vortex. Only two men of the six who boarded her survived and were taken with the others to Boston by the corvette (Uboat.net).
SS Cherokee was a 5,986-ton passenger steam ship with 169 persons on board. She was en route with sand for ballast between Halifax and Boston when two torpedoes from U-87 struck her. In the space of six minutes the ship was hit, lifted partially out of the water, turned to run, hit again, and sank by the bow. The boats could not be launched due to high running seas but seven rafts were cut loose.
The steamer Norlago rescued 44 survivors and took them to Provincetown, Massachusetts. Another 39 were taken to Boston by USCGC Escanaba (WPG 77). Altogether 86 persons perished during the gale-tossed attack. Captain Twiggs E. Brown survived (Uboat.net). Among the survivors were two officers in the Soviet Navy who were passengers. One can only imagine the trauma which would have ensued had the rescue ships hit the mines which Berger had laid at the approaches to Boston Harbor.
Berger took U-87 eastbound after this attack to a point southwest of Cape Sable, then on the 20thhe moved close inshore near Seal Island before being attacked and having his submarine damaged by Allied aircraft on the 25th. By then, on the 21st, he had exited New England waters and he decided to return home to base. The patrol began in St. Nazaire on the 19th of May and ended there 51 days later on the 8th of July 1942.
Joachim Berger was born in Berlin in June 1913 and lived until age 29 when U-87 was sunk off the Portuguese coast by depth charges from HMCS Shediac and HMCS St. Croix (Niestle, UBoat.net) on 4 March 1943. All 49 officers and men perished.
Berger was responsible for sinking five Allied ships of 38,014 tons (the others were Cardita, Nyholt, and Agapenor). A member of the Crew of 1934, and started with the 2ndtorpedo boat flotilla and by May 1941 the 24th U-boat training flotilla. He commissioned U-87 in August 1941 and was the boat’s only commander.
SOURCES:
Busch, Rainer and Röll, Hans-Joachim, “German U-Boat Commanders of World War II, A Biographical Dictionary,” Greenhill Books, London and Naval Institute Press, Annapolis, MD, 1999
Helgasson, Guðmundur and Kolbicz, Rainer, www.uboat.net, 2015
Högel, Georg, “U-Boat Emblems of World War II 1939 – 1945,” Schiffer Military History, Atglen, PA, US, 1999
Kurowski, Franz, Knights of the Wehrmacht, Knight’s Cross Holders of the U-Boat Service,” Schiffer Military/Aviation History, Atglen, PA, US, 1995
Mason, Jerry, www.uboatarchive.net – for the KTB or war diary of this patrol, 2015
Niestlé,Axel, “German U-Boat Losses During World War II – Details of Destruction,” Naval Institute Press, Annapolis, MD, 1998