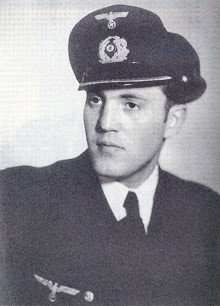 Hellmut Neuerburg who skippered U-869 on an ill-fated patrol across New England waters for 4 days in February 1945. Photo courtesy of http://uboat.net/men/commanders/871.html
KapitänleutnantHellmut Neuerberg and his crew spent their last days passing through New England on their way to meet their fate off the New Jersey shore two days later. Although it is entirely possible that on a 66-day patrol the U-boat spent considerably more time in New England waters, at the very minimum it would have required four days to cross the region and access New Jersey, where it met its fate.
The uncertainty arises from the fact that from Christmas 1944 then January 6 1945 to when it was sunk 11 February we have no positions from the submarine. It is therefor estimated that Neuerberg took U-869 on a straight course following the tracks of his predecessors from about 100 nautical miles south of Cape Sable Nova Scotia and headed west to a point about 150 miles south of Montauk New York before exiting the area.
On the 11th of February 1945 U-869 was caught by the US Navy destroyer escorts USS Howard D. Crow and USS Koiner, which dropped “Hedgehogs” and depth charges on the contact. All 56 submariners perished. This is according to a US Coast Guard reappraisal of the loss in June 2005, according to UBoat.net. This submarine was the subject of the intensive investigation when discovered on 2 September 1991, covered in the best-selling book “Shadow Divers” by Robert Kurson. At the time the book was written the official history had the boat sunk off Saharan Africa, corrected to New Jersey, where it was thought her own torpedoes had come around to hit and sink the sub.
Hellmut Neuerberg was born in August 1917 in Strasbourg and was 27 when killed off New Jersey. Between 1938 and 1943 this member of the Crew of 1936 was seconded to the Luftwaffe. He joined U0Boats in April 1943, serving on UAA in October – November 1943. He commissioned U-869 in January 1944 and went on three patrols for a total of 73 days, the first short patrols being from Germany and within Norway. Neuerberg sank no ships and mined no harbors during his career, and received no decorations. The submarine – and the remains of her crew – lie east northeast of Atlantic city, about 70 miles out in the ocean in 240 feet of water (UBoat.net).
SOURCES:
Busch, Rainer and Röll, Hans-Joachim, “German U-Boat Commanders of World War II, A Biographical Dictionary,” Greenhill Books, London and Naval Institute Press, Annapolis, MD, 1999
Helgasson, Guðmundur and Kolbicz, Rainer, www.uboat.net, 2015
Högel, Georg, “U-Boat Emblems of World War II 1939 – 1945,” Schiffer Military History, Atglen, PA, US, 1999
Kurowski, Franz, Knights of the Wehrmacht, Knight’s Cross Holders of the U-Boat Service,” Schiffer Military/Aviation History, Atglen, PA, US, 1995
Kurson, Robert, Shadow Divers: The True Adventure of Two Americans Who Risked Everything to Solve One of the Last Mysteries of World War II, Random House, 2004
Mason, Jerry, www.uboatarchive.net– for the KTB or war diary of this patrol, 2015
Niestlé, Axel, “German U-Boat Losses During World War II – Details of Destruction,” Naval Institute Press, Annapolis, MD, 1998