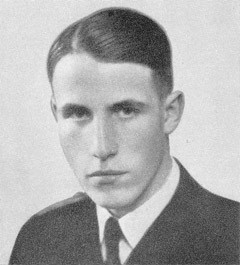 Peter Rogowsky, who brought U-866 on a five-day incursion
into New England waters in March 1945. Photo courtesy http://uboat.net/men/commanders/1021.html.
Oberleutnant zur See
Peter Rogowsky patrolled New England for roughly five days in March 1945.
Because the U-boat was sunk several days later off Halifax, and because U-boat
skippers were no longer in the habit of reporting their daily positions via
radio to headquarters in Germany (a practice which resulted in the loss of several
boats), details of the patrol are limited – a war diary obviously does not
exist. However from Uboat.net and Uboatarchive.net we can piece together the
patrol.
On the 8th of
March 1945, possibly sooner U-866 passed south of Cape Sable Nova Scotia quite
close, heading west. By the 10th of March the boat was less than 100
miles east-southeast of Cape Cod Massachusetts, then it turned around and
headed southeast. For two days until the 12th the boat motored east
across the entrance to the Gulf of Maine, then exited the area bout 100 miles
south of Cape Sable. No ships were sunk during this incursion.

This patrol began on the 6th of February 1945 in Bergen, Norway. On the 18th of
March the US Navy destroyer escorts USS Menges, USS Mosley, USS Lowe, and USS
Pride caught the submarine east-northeast of Halifax and sent it to the bottom
with all hands. Fifty-five sailors perished, including Rogowsky, aged 25.

Peter Rogowsky was born in
June 1919 in Berlin and was a member of the Crew of 1938. He began U-boat
training in February 1941 (Busch & Roll), and was supernumerary Watch
Officer on U-595 up to April 1942. After a few months in staff roles he was 2nd
Watch Officer of U-185 and a Watch Officer of UF 2 up to March 1943. He joined
U-552 as Watch Officer in March 1943 before taking command of U-866 in
September 1944. Overall he patrolled once, fatally, for 41 days, and had three
smaller patrols of 3, 2 and 4 days respectively from Germany and within Norwegian
ports. Rogowsky sank no ships in his career and received no decorations.