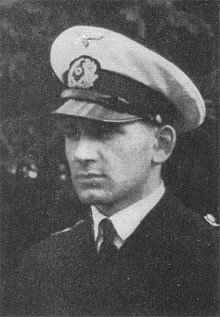 Rudolf Premauer who brought U-857 through New England waters
roughly the 7th to 11th of April 1945. Photo courtesy of http://uboat.net/men/commanders/943.html
Kapitänleutnant
Rudolf Premauer is believed to have brought his command, U-857 through New
England waters en route between Horten Norway, which he left on 6 February, and
the 30th of April, at which point the submarine was sunk off Cape
Hatteras. Based on a likely route and timing, this author thinks the submarine
transited from about 100 miles south of Cape Sable, Nova Scotia westbound and
then southwest to a point about 200 miles south of Montauk New York, starting
on the 7th of April and ending on the 11th.
Whilst the dates may never
be known, as the war diary went down with the submarine and it only reported 10
daily positions during 84 days (Uboat.net), based on the routes taken by over
70 other U-boats through New England going to New York or Cape Hatteras, this
was the standard route to take. The big question is whether or not Premauer and
his men may have spent more than just the bare minimum in the region. We will
never know for sure. In fact even the date of her demise is uncertain.

n Uboat.net she is listed as
“Missing since April 1945 in the North Atlantic off the US East Coast. No
explanation exists for its loss. 59 dead (all hands lost). (FDS/NHB, April
1994).” Niestle’s report is similarly vague. Uboat.net says that it is possible
that U-857 was lost in the same attack as U-879 off Hatteras, or that a US Navy
blimp/airship destroyed her with a homing torpedo, as claimed by one such
airship on 18 April 1945.

In several publications
U-857 is given credit for the sinking of the Belgian Airman (6,959 tons on 14
April), Swiftscout (8,300 tons, 18 April), and damaging the Katy (23 April,
6,825), however Uboat.net and the same publications go to pains to point out
that they might also have been sunk by U-879 under Irwin Manchen, which was
sunk off Cape Hatteras on the 30th of April. Again, the verdict is
out. Perhaps one day someone will find evidence on both or either submarine on
the seafloor.

Rudolf Premauer was born in
May 1919 in Stuttgart and lived to the age of 25. A member of the Crew of
1937b, he began U-boat training in February 1941, and was 1st Watch
Officer of U-510 up to April 1943 (Busch & Roll). He trained further under the
24th U-Flotilla up to August 1943, then workup for U-857 began that
month. He commanded U-857 from September 1943 to April 1945, and was believed
at first to have been sunk off Boston in a destroyer attack on the 7th
of April, however that was determined to have been a false alert, not a
submarine (as in possibly a wreck, or a whale). Depending on whether he or
Manchen are given credit, Premauer sank 2 ships and damaged a third on this
patrol. He received no decorations.