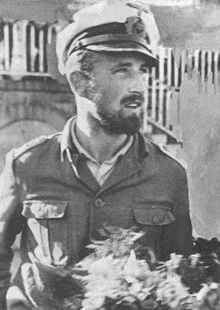 Eberhard Greger, commander of U-85 which was sunk days after leaving New England waters in April 1942. Photo courtesy of http://uboat.net/men/commanders/383.html
Oberleutnant zur See Eberhard Greger brought U-85 on a short patrol through New England waters between the 8th and 10th of April, 1942. He sank the Norwegian tanker Christian Knudsen west of New England in waters off New Jersey, on the day it exited the area, the 10th of April. Because nothing was heard from either the U-Boat or the ship after 9 April, it is possible that the Christian Knudsen was sunk in New England waters, however the authority on such matters, Uboat.net, has the position of the sinking off the New Jersey coast. The ship was on its way to Cape Town South Africa and would have assumed a more southerly rather than easterly course.
Three days later U-85 was caught on the surface by the US Navy destroyer USS Roper, whose crew where very keen on a kill, having witnessed hundreds of thousands of tons of Allied shipping and hundreds of Allied sailors being killed off Cape Hatteras, known as Torpedo Junction. U-85 fought it out on the surface until it was a lost cause, and roughly half of the 46 men aboard abandoned the submarine.
Desperate to confirm sinking the U-Boat, the officers and men of the USS Roper pressed on the attack, while the Germans in the water could be heard calling out “Comrade”. Eleven depth charges were dropped on the site, killing all of the sailors in the water (Uboat.net, Niestle, US Navy reports). This was the first German submarine from Operation Paukenschlag sunk off the US East coast. The propeller of the USS Roper is on display at an entrance to the Massachusetts Institute of Technology (MIT) on Massachusetts Avenue, Cambridge, MA.
Twenty-nine German sailors’ bodies were retrieved – two others were too badly mangled. Those retrieved were buried in the National Cemetery at Hampton Roads, Virginia (Wynn, Vol. 1, p.65). Eberhard Greger was not one of those retrieved, and went down with the sub, which is now a popular diving site. He was born in September 1915 in the Netherlands and was 26 when lost. His total ships sunk were three for 15,060 tons and he was not decorated.
Greger was a member of the naval Class of 1935. He obtained early experience aboard the Z-9 Wolfgang Zenker up to October 1939 when he joined U-Boats, where he served as 1stWatch Officer of U-110 to April 1941. He commanded U-85 from June 1941 to its demise as the first U-Boat sunk by the US Navy in World War II.
SOURCES:
Busch, Rainer and Röll, Hans-Joachim, “German U-Boat Commanders of World War II, A Biographical Dictionary,” Greenhill Books, London and Naval Institute Press, Annapolis, MD, 1999
Helgasson, Guðmundur and Kolbicz, Rainer, www.uboat.net, 2015
Högel, Georg, “U-Boat Emblems of World War II 1939 – 1945,” Schiffer Military History, Atglen, PA, US, 1999
Kurowski, Franz, Knights of the Wehrmacht, Knight’s Cross Holders of the U-Boat Service,” Schiffer Military/Aviation History, Atglen, PA, US, 1995
Mason, Jerry, www.uboatarchive.net – for the KTB or war diary of this patrol, 2015
Niestlé,Axel, “German U-Boat Losses During World War II – Details of Destruction,” Naval Institute Press, Annapolis, MD, 1998