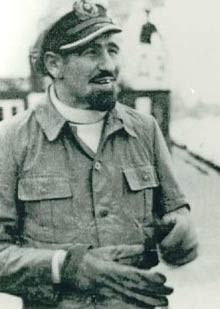 Kapitänleutnant Horst Uphoff before he and his comrades were all lost between Bermuda and the Bahamas in August 1943 to a Bermuda-based aircraft piloted by Thomas Rudolph Evert. Photo courtesy of http://uboat.net/men/commanders/1295.html.
Oberleutnant zur See (later Kapitänleutnant) Horst Uphoff brought his charge U-84 on a six-day incursion into New England waters beginning the 8th of April 1942 when he proceeded westbound from a point several hundred miles south of Cape Sable, Nova Scotia. After nearly a week of zig zagging north and south while motoring west, the submarine exited south of Montauk, New York on the 13th of April.
On the day which U-84 entered the region it sank the Yugoslavian ship Nemanja of 5,226 tons 180 nautical miles south of Cape Sable, Nova Scotia and barely in New England waters. The pursuit of Nemanja took ten hours (the ship was zig zagging) and cost Uphoff four torpedoes. Captain Karlo Loser was lost along with a dozen others. Thirty four men were rescued by a ship named the Franche Comte the following day and landed in Halifax two days later, on 11 April.
The only other ship sunk by Uphoff on this patrol was the Chenango, a Panamanian vessel sunk off Hatteras on 21 April. In that instance 37 were killed and only one survived. The patrol began in Brest France on the 16th of March and ended two months later on the 16th of May. On the 2nd of April U-84 was refueled off Newfoundland by the U-tanker U-A. Perhaps one of the reasons that U-84 did not sink more ships is that the submarine moved 3-400 miles east of Hatteras looking for prey between there and Bermuda and found none (Wynn, Vol. 1, p.63).
Horst Uphoff was born in 1916 and was sunk with all hands off Bermuda in August 1943 (see below). He joined the Kriegsmarine as a member of the Crew of 1935. After experience aboard the U-boat supply ship Donau he joined U-Boats in October 1940. As a 1stWatch Officer under Endrass in U-46 Uphoff helped to sink 17 ships of nearly 100,000 tons (Uboat.net).
In April 1941 Uphoff commissioned U-84 and began patrolling in her from Norway in August 1941. He performed eight patrols in the sub, sinking or damaging seven ships of over 37,000 tons. Following his death he was awarded the German Cross in Gold – during it the Iron Cross 1st Class. 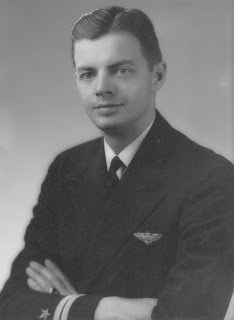