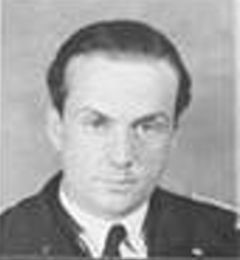 Richard Bernadelli, who brought U-805 on a two-day patrol to
New England waters in May 1945 to surrender. This was his POW ID photo. Photo
courtesy of http://uboat.net/men/commanders/76.html
Korvettenkapitän Richard
Bernadelli brought his command U-805 into New England waters to surrender in Casco
Bay, Maine and intern in Portsmouth, New Hampshire on the 15th of
May, 1945. U-805’s patrol began in Bergen, Norway on the 17th of
March 1945. Starting on the 14th of April U-805 joined five other
submarines to form the Seewolf patrol line, to draw escort hunter killer groups
away from the UK and Channel waters, however they were unsuccessful and all but
two of the U-boats were sunk by Allied forces including the carrier force
around USS Croatan.

On the 18th and
19th of April (Wynn), US navy aircraft based in Teceira, the Azores
Islands, found U-805 on the surface twice, but both times the submarine
submerged and escaped. The escort carrier USS Mission Bay was only 50 miles
away and supported the hunt. Then on the night of 20/21 April the destroyer USS
Mosely located the sub and attacked for two hours, again without result.

Only U-805 and U-858
survived by the 24th of April to make their way to the American
coast, and Bernadelli headed for the Halifax region to patrol. According to the
war patrol diary, or KTB posted at UBoat.net, none of the daily positions are
given, however Kenneth Wynn (Vol. 2, p.166) provides the detail that after
Doenitz’s surrender order Bernadelli radioed the Allies on the 9th
of May, and on the 13th the U-boat rendezvoused with her new captors
15 miles south of Cape Race, Newfoundland.

UK historian Derek Waller, a
specialist on the final disposition of surrendered U-boats, provides a great
deal more detail. In private correspondence he informed this author that U-805
was the first U-boat to send a surrender signal, on the 8th of May,
and that Bernadelli set a course to the Azores Islands and, indirectly, Europe.
The following day Allied forced advised U-805 to proceed to Newfoundland Canada
to surrender instead.

On the 10th of
May the USS Otter and USS Varian, destroyer-escorts, were instructed to set out
from the naval base in Argentia Newfoundland to meet her, which the began doing
on the 11th.  The Allied ships
reached U-805 on the 12th of May and managed to send over a boarding
party to the U-boat. At that point a rendezvous point in Casco Bay, Maine, near
Portland was determined as the appropriate place of surrender. The 3-vessel
convoy accordingly arrived at Casco Bay at 8 AM on the 15th of May
1945.

(Note: Although the distance
is quite far – some 800 nautical miles – if the boat proceeded on the surface
at 20 knots, then it could have reached Portsmouth roughly 40 hours later, or
on the 15th. According to Uboat.net and Wynn, U-805 arrived late on
the 14th.) 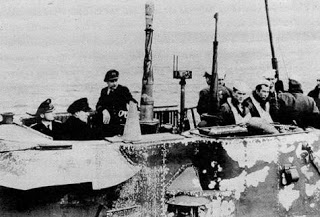 U-805 with Richard
Bernadelli and other officers looking “surly” at the conning tower for the hand
over to the US Navy. Photo source SeacoastNH.com, http://www.seacoastnh.com/Maritime-History/The-Shipyard/nazi-u-boats-surrender-at-portsmouth/?start=1 (AP Photo)
Later that very day, the
surrender formalities having been completed, the US Coast Guard Cutter Argo
(WPC-100), under the command of Lieutenant Junior Grade Eliot Winslow took
charge of U-805 and, with a number of the German prisoners stowed forward on
the tug, escorted it 50 miles down the coast from Casco Bay to Portsmouth New
Hampshire, arriving that same afternoon.
To see footage of the
surrender at sea, boarding of the U-boat, disembarkation of German sailors on
US soil, etc. see https://www.youtube.com/watch?v=RFPpRIZNR18.

Charlie Gray, writing for SeacoastNH.com,
described the arrival in Portsmouth thus:
“The
Navy tug US Dekanisora with dozens of members of the press met the sub off the
Isles of Shoals. A large patch of green water, dyed with chemicals, was the
spot marked for the rendezvous. Three German officers with “surly
expressionless faces” were seen on deck and a near accident occurred when
the U-boat cut across in front of the press tug, missing by about 15 feet and
angering the tug captain.

The
official surrender took place at Kitt’s Rock Buoy, one mile out from Whaleback
Lighthouse at the entrance to the harbor at 4:25pm [15 May]. After the ship
arrived at the navy yard in Kittery and publicity photos were taken, 27 crewmen
and four officers were removed to the naval prison by bus.”

This image shows
USCGC Argo with U-805 in the background, escorting the U-boat to its internment
berth in Portsmouth Naval Yard from Casco Bay Maine. It is from the collection
of the Argo’s colorful commander, Lt. (jg) Eliot Winslow. The US Coast Guard
site from which it was taken provides the following descriptive caption: “His
caption hand-written caption reads: “U-805: The U-805, first submarine to
surrender, is escorted by ARGO at 12 knots for the last 50 miles to Portsmouth,
N.H.  Ten prisoners were stowed in the forward anchor chain locker, 230 aft
over the screws, with 5 officers below decks, all under heavy guard.
Modern conveniences at their disposal consisted solely of a 10 quart
pail.  Shower baths with smelling salts and sandwiches were
omitted.”   Courtesy of the Winslow family, from http://www.uscg.mil/history/webcutters/Argo1933.asp

The German sailors were
interviewed by naval intelligence about guided bombs, nuclear weapons,
ballistic projectiles, and jet airplanes. Gray interviewed a German lieutenant
named Albert Finster who blamed the UK for the war and for ruining Hamburg, his
hometown. U-805 was later used for “Victory Visits” to different ports on the
US east coast to show the public the mysterious and deadly menaces which had
terrorized the eastern seaboard for years, particularly in early 1942.
U-805 was considered “unallocated”
which per Allied agreements, meant that it was to be sunk before 15 February
1946. U-805 was ultimately sunk by the submarine USS Sirago, SS 485, at 10:29
am on the 8th of February 1946 roughly 45 nautical miles northeast
of Provincetown and east of Gloucester, Massachusetts, in 850 feet of water, in
rough position 42°30’N / 69°27’W (Waller) (69.27W according to Niestle).

Historian Derek Waller provided
great detail regarding U-805’s final fate. On the 4th of February a
yard tug brought U-805 to Lower Portsmouth Harbor and the USS Sirago left New
London on the same day, heading for Provincetown. Between 3:18 PM and 10:58 PM
on the 5th the submarine rescue vessel USS Penguin (ASR 12) set off
with U-805 in tow for the designated sinking site, but was ordered back and
returned to the lower harbor. Finally at 6:37 pm on the 7th of February
the USS Penguin with U-805 in tow set off for the sinking site.

The German and American
submarines made the rendezvous and at 8:46 AM on 8 February U-805 was cast off.
At 9:59 AM the Sirago missed with a torpedo that passed beneath U-805. The same
happened with the second torpedo. A third projectile struck home at 10:29 AM,
breaking the back of the U-boat. A fourth torpedo was redundant and passed over
the spot where U-805 had been (Waller correspondence). She was the first German
U-boat to surrender in Portsmouth NH, the largest US submarine base in the US
east coast, and created quite a sensation there among the navy, civilians, and
press.

Richard Bernadelli was born
in 1908 and lived until 1986 and the age of 77. Though he sank no ships during
his career, he earned the Iron Cross 1st and 2nd Class as
well as the Fleet War Badge (Uboat.net, Fernando Almeida). A member of the Crew
of 1932 he was initially a Watch Officer on the heavy cruiser Admiral Hipper up
to March 1943, when he joined U-boats. After training in the 23rd
U-Flotilla up to December 1943 he worked up U-805 and commissioned her,
commanding the sub from February 1944 until the capitulation (Busch &
Roll). Detained as a POW in the US, he was freed on the 7th of March
1946.

It is not known in which
camp Bernadelli spent most of his months as a POW, but is believed that he
spent at least some time in Fort Devens, Massachusetts. For extensive original
documentation of the looting of surrendered German submarines as well as taking
of personal effects from POWs by US military and government personnel, see http://www.uboatarchive.net/U-873.htm.