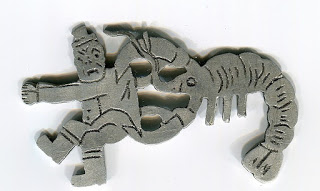 The emblem of U-653: a lobster devouring British Prime Minister Winston Churchill. He was living near my hometown and I got it directly from him 10 years ago. Andreas.” Photo credit: http://gmic.co.uk/topic/659-kriegsmarine-cap-emblems/?page=9
Kapitänleutnant(later Korvettenkapitän) Gerhard Feiler brought his charge U-653 for a brief three-day patrol through southwestern New England waters between the 4thand 6th of June, 1942. Entering from some 300+ miles south of Montauk, the submarine headed east for a day and then southeast and out of the region on the 6th. No ships were sunk during this incursion.
This patrol began in Brest on the 25th of April and ended there on the 6th of July, 73 days later. On the 17th of May Feiler sank the British ships Peisander, followed on the 7th of June by the destruction of the US warship USS Gannet (AVP 8) north of Bermuda. On the 21st of May U-653 was part of an eight-boat line called Padfinder looking to determine routes of Allied ships to and from New York and the Americas. It disbanded in less than a week. On the way back to France U-653 refueled from the U-tanker west of the Azores after mid-June.
Gerhard Feiler was born in Breslau in September 1909 and survived the war, living until 1990 and the age of 80. A member of the Crew of 1933, he first served abgoard the destroyer Z-20 / Karl Galster (Uboat.net) before joining U-Boats in 1940. He commissioned U-653 in May 1941. After two years and 7 patrols he moved ashore in the 1st, 20th and 19th flotillas, most of them in training capacities. He sank or damaged 5 ships of over 25,000 tons and was awarded the German Cross in Gold.
SOURCES:
Busch, Rainer and Röll, Hans-Joachim, “German U-Boat Commanders of World War II, A Biographical Dictionary,” Greenhill Books, London and Naval Institute Press, Annapolis, MD, 1999
Helgasson, Guðmundur and Kolbicz, Rainer, www.uboat.net, 2015
Högel, Georg, “U-Boat Emblems of World War II 1939 – 1945,” Schiffer Military History, Atglen, PA, US, 1999
Kurowski, Franz, Knights of the Wehrmacht, Knight’s Cross Holders of the U-Boat Service,” Schiffer Military/Aviation History, Atglen, PA, US, 1995
Mason, Jerry, www.uboatarchive.net – for the KTB or war diary of this patrol, 2015
Niestlé,Axel, “German U-Boat Losses During World War II – Details of Destruction,” Naval Institute Press, Annapolis, MD, 1998