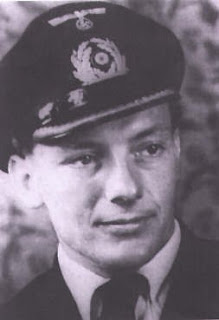 Gerd Kelbling, who skippered U-593 for 13 days in New England waters during May and June, 1942. Photo courtesy of http://uboat.net/men/kelbling.htm
Kapitänleutnant Gerd Kelbling brought his command, U-593 into New England waters for just shy of two weeks total between the 8th of May and 7th of June 1942. There were three separate incursions: from May 8th to May 11ththe boat entered just south of Cape Sable Nova Scotia and moved southwest to a point about 150 nautical miles south of Nantucket. Then it motored west and passed south of Montauk towards New York Harbor and out of the region.
After damaging the Greek freighter Stavros on the 14th of May and sinking the Persephone of Panama on the 25th the sub returned eastbound along a similar route. On the 27thof May U-593 passed south of Montauk and for four days, then on the 30thKelbling dog-legged northwest a day and then on the 1st of June the submarine exited the area several hundred miles south of Cape Sable. The third and final incursion occurred a few days later when between the 5thand 7th the sub ducked into the region from south of Cape Sable for just one day. No ships were sunk or attacked in the New England area during this patrol.
During the first week of May U-576 directed U-593 and three other boats towards a convoy 80 miles southwest of Cape Sable, however they never locked in and instead dispersed between Halifax and New York. The convoy was “hugging the coast,” according to Wynn (Vol. 2, p. 64).  After sinking the Persephone Kelbling and his men were subject to an attack by convoy escorts but managed to escape undamaged. The patrol began on 20 April in St. Nazaire France and ended there on the 18th of June, 1942.
Gerd Kelbling was born in June 1915 in Silesia and survived the war, living until June 2005 and age 89. The total bag of this “U-Boat Ace” (Uboat.net) was 18 ships sunk or damaged including 7 warships of roughly 57,000 tons total. In August 1943 he was awarded the Knights Cross. Kelbling was a member of the Crew of 1934, following which he served aboard minesweepers (UBoat.net) then U-557. He then joined U-557 in 1941 before commissioning U-593 in October.
After extensive experience in the North Atlantic he brought the sub through the blockade off Gibraltar and into the Mediterranean Sea in October 1942. The boat survived a dozen patrols there before being pinned down for over a day by two Allied destroyers (Niesle, Uboat.net). Kelbling and all his men were taken prisoner and sent to Canada until September 1947.
SOURCES:
Busch, Rainer and Röll, Hans-Joachim, “German U-Boat Commanders of World War II, A Biographical Dictionary,” Greenhill Books, London and Naval Institute Press, Annapolis, MD, 1999
Helgasson, Guðmundur and Kolbicz, Rainer, www.uboat.net, 2015
Högel, Georg, “U-Boat Emblems of World War II 1939 – 1945,” Schiffer Military History, Atglen, PA, US, 1999
Kurowski, Franz, Knights of the Wehrmacht, Knight’s Cross Holders of the U-Boat Service,” Schiffer Military/Aviation History, Atglen, PA, US, 1995
Mason, Jerry, www.uboatarchive.net – for the KTB or war diary of this patrol, 2015
Niestlé,Axel, “German U-Boat Losses During World War II – Details of Destruction,” Naval Institute Press, Annapolis, MD, 1998