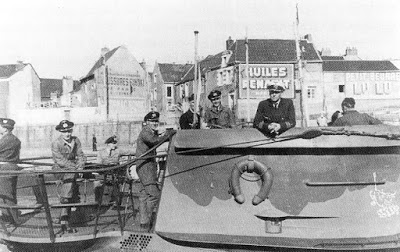 U-578 showing Ernst-August Rehwinkel at the conning tower in white cap. Taken in St. Nazaire May 7th 1942. The boat’s emblem of a snorting bull is visible at lower right. Photo courtesy of DUBMA, c/o Dani Janer Åkerberg http://www.uhistoria.com/ uhistoria/historia/huboots/u500-u599/u0578/u578.htm
Korvettenkapitän(later Fregattenkapitän) Ernst-August Rehwinkel (aged 40), brought his U-boat U-578 westwards from south of Cape Sable to a point off Montauk between the 22nd and 25th of February 1942. They sank no ships during the incursion into New England waters.
The patrol began in St. Nazaire on the 3rd of February and ended there 51 days later on the 25th of March. Two days after clearing the region U-578 sank the US freighter R. P. Resor and the following day the US Navy destroyer USS Jacob Jones (DD 130) with the loss of 138 killed (only 11 survived) off the Delaware coast.
On the 12th of March, whilst on their way back to France, the submariners dispatched the Norwegian steamer Ingerto, a straggler from Convoy ON 70, from which there were no survivors of a crew of 32 men.
Rehwinkel was born in October 1901 and went missing with the rest of U-578’s crew on the 6thof August 1942 in the Bay of Biscay. His total tally was 4 merchant ships sunk for 23,635 tons and the USS Jacob Jones of 1,090 tons, also sunk.
SOURCES:
Busch, Rainer and Röll, Hans-Joachim, “German U-Boat Commanders of World War II, A Biographical Dictionary,” Greenhill Books, London and Naval Institute Press, Annapolis, MD, 1999
Helgasson, Guðmundur and Kolbicz, Rainer, www.uboat.net, 2015
Högel, Georg, “U-Boat Emblems of World War II 1939 – 1945,” Schiffer Military History, Atglen, PA, US, 1999
Kurowski, Franz, Knights of the Wehrmacht, Knight’s Cross Holders of the U-Boat Service,”
Schiffer Military/Aviation History, Atglen, PA, US, 1995
Mason, Jerry, www.uboatarchive.net – for the KTB or war diary of this patrol, 2015
Niestlé,Axel, “German U-Boat Losses During World War II – Details of Destruction,” Naval Institute Press, Annapolis, MD