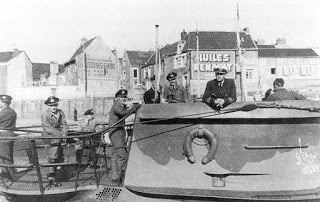 U-578 showing Ernst-August Rehwinkel at the conning tower in white cap. Taken in St. Nazaire May 7th 1942. The boat’s emblem of a snorting bull is visible at lower right. Photo courtesy of DUBMA, c/o Dani Janer Åkerberg http://www.uhistoria.com/ uhistoria/historia/huboots/u500-u599/u0578/u578.htm
Korvettenkapitän(soon to be Fregattenkapitän) Ernst-August Rehwinkel brought U-578 for its second patrol to New England waters on the 27th of May 1942, the same day he sank the Polyphemus. He would go on to sink the Norwegian Berganger south of Nantucket on the 2nd of June before exiting the region on the 9th. This patrol began in St. Nazaire onk the 7th of May and ended there on the 3rd of July, 58 days later.
From the day the sub entered some 300 miles south of Cape Sable, the U-boat then motored northwest for one day, then west for another day until it was about 150 miles southeast of Nantucket. The boat remained in the general vicinity, tacking back and forth east and west and north and south, until the 9th of June. The back-and-forth was due to the sub being enlisted into the seven-sub patrol line called Padfinder group which explored waters some 400 miles east of New York for traffic between that port and the Americas. After its patrol off New England the vessel went to the Cape Hatteras region and then back to France, only sinking those two ships.
The Polyphemus was a 6,269-ton Dutch ship en route from Sydney Australia to Halifax and Liverpool via Panama. On 25 May she rescued survivors of the Norland and took 14 persons on board. Rehwinkel had to stalk the ship on 27th May for five hours, then he sent two torpedoes at the merchantman, which destroyed the ship’s stern and killed 15 Chinese crew there.
That left 65 persons on board, who were rescued by a variety of vessels: the Maria Amelia, the fishing vessel Hunting-Sanford, the fishing vessel Alpha and Estselle, the merchant ship Mirandella and the USCG Cutter General Greene (WPC 140). They were landed in various ports (Uboat.net). In fact one of the lifeboats was come upon by U-566 under Borchert who provided the survivors with water (more detail under the Norland entry in www.uboatsbermuda.blogspot.com).
Rehwinkel’s next victim was the 6,826-ton Norwegian motor ship Berganger, which apparently had just escaped a determined but unsuccessful attack by U-213 under von Varendorff (Uboat.net, Wynn, Vol. 2, p.53). That same day while about 150 miles south southeast of Nantucket the ship was hit by U-578. Four of the merchant sailors were killed and 43 managed to get away. Of those, 17 were rescued by the Norwegian ship Banaderos and taken to New York, 13 by the fishing vessel Mary J. Landry and landed at New Bedford, and 13 by the USS Madison (DD 425) and taken to Norfolk (Uboat.net).
Rehwinkel was born in October 1901 and went missing with the rest of U-578’s crew on the 6thof August 1942 in the Bay of Biscay. His total tally was 4 merchant ships sunk for 23,635 tons and the USS Jacob Jones of 1,090 tons, also sunk.
SOURCES:
Busch, Rainer and Röll, Hans-Joachim, “German U-Boat Commanders of World War II, A
Biographical Dictionary,” Greenhill Books, London and Naval Institute Press, Annapolis, MD, 1999
Helgasson, Guðmundur and Kolbicz, Rainer, www.uboat.net, 2015
Högel, Georg, “U-Boat Emblems of World War II 1939 – 1945,” Schiffer Military History, Atglen, PA, US, 1999
Kurowski, Franz, Knights of the Wehrmacht, Knight’s Cross Holders of the U-Boat Service,” Schiffer Military/Aviation History, Atglen, PA, US, 1995
Mason, Jerry, www.uboatarchive.net – for the KTB or war diary of this patrol, 2015
Niestlé,Axel, “German U-Boat Losses During World War II – Details of Destruction,” Naval Institute Press, Annapolis, MD, 1998