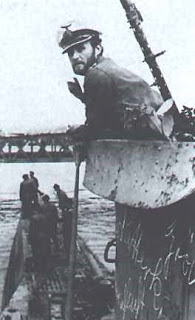 Helmut Möhlmann following a patrol. He sank or damaged 8 ships over his career, one of them, the Hertford, in New England waters. Photo courtesy of http://uboat.net/men/moehlmann.htm
.
Kapitänleutnant(later Korvettenkapitän) Helmut Möhlmann took his command U-571 on a five-day incursion of New England waters beginning on the 29thof March and ending on the second of April, 1942. On the day that U-571 entered the area it sank the British steamer Hertford. Möhlmann headed west from a point several hundred miles south of Cape Sable, Nova Scotia and passed south of Nantucket on the first of April and west of Montauk the following day.
The Hertford was a large, 10,923-ton freighter steaming for FedNav of Montreal between Sydney Australia and Halifax and the UK via Panama when it was struck by two torpedoes. Four men out of 62 were killed, the balance of 58 made it ashore in Liverpool, Nova Scotia (Captain Tuckett and 18 seafarers), were picked up by the British Glenstrae (21 of them) and 20 including gunners were rescued by the British Fort Townsend and taken to Halifax.
Following the Hertford U-571 went on to sink the Norwegian tanker Koll off Bermuda on the sixth of April and on the 14th the Margaret off Hatteras (see www.uboatsbermuda.blogspot.comfor the story of the Koll).
Möhlmann was born in 1913 in Kiel and survived the war, living until 1977 and age 63. A member of the German Navy Crew of 1933, he started out in the torpedo boat Luchs as well as the light cruiser Nürnberg before joining U-Boats in April 1940. He served aboard U-143 and U-52 without engaging the Allies before assuming command of U-571 from May 1941 until May 1943, on which he patrolled eight times. After that he moved to U-Boat staff headquarters (BdU org) and then the 14th Flotilla in Narvik, Norway. He was a prisoner of war for four months following the war, after which he joined the modern German navy (UBoat.net, Fernando Almeida).
In order to return to La Pallice France, from where it left on the 10th of March, U-571 took fuel from U-459, a U-tanker, roughly 500 nautical miles northeast of Bermuda. She returned to La Pallice on the seventh of May 1942.
SOURCES:
Busch, Rainer and Röll, Hans-Joachim, “German U-Boat Commanders of World War II, A Biographical Dictionary,” Greenhill Books, London and Naval Institute Press, Annapolis, MD, 1999
Helgasson, Guðmundur and Kolbicz, Rainer, www.uboat.net, 2015
Högel, Georg, “U-Boat Emblems of World War II 1939 – 1945,” Schiffer Military History, Atglen, PA, US, 1999
Kurowski, Franz, Knights of the Wehrmacht, Knight’s Cross Holders of the U-Boat Service,” Schiffer Military/Aviation History, Atglen, PA, US, 1995
Mason, Jerry, www.uboatarchive.net – for the KTB or war diary of this patrol, 2015
Niestlé,Axel, “German U-Boat Losses During World War II – Details of Destruction,” Naval Institute Press, Annapolis, MD, 1998