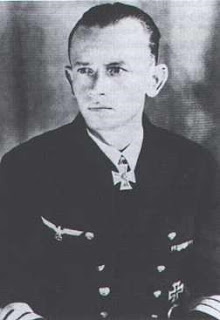 Karl Thurmann who brought U-553 on a 14-day patrol of New England and the Bay of Fundy in May and June 1942. Photo courtesy of http://uboat.net/men/thurmann.htm.
Kapitänleutnant (soon to be Korvettenkapitän) Karl Thurmann brought U-553 on a two-week incursion into New England as well as Canadian waters between the 25th of May and the 8thof June 1942. To begin with U-553 rounded Cape Sable Nova Scotia to starboard and headed north until the 27th of May, when it exited New England waters to patrol the Bay of Fundy for two days.
On the 30th the submarine returned and headed south to a point roughly 250 miles southeast of Nantucket, which it reached on June 2nd. Then the boat headed west for three days until the 5th. At that point Thurmann dog-legged back northeast for a day, then headed southeast until U-553 exited New England waters heading east at a point roughly 300 nautical miles south of Cape Sable.
Thurmann sank two ships (British Nicoya and Dutch Leto) before entering the area on 12 May, and one ship – the British Mattawin of 6,919 tons, while in New England waters, on the 2nd of June. The ship was hit at 7:18 am German time and finished off only 12 minutes later by a coup de grace. Perhaps amazingly, all 71 persons on board the motor vessel managed to disembark. Thirty seven of them were rescued by the merchant ship Torvanger and taken to Halifax. The balance of 34 persons, including seven passengers, where found by the US Coast Guard cutter General Greene (WPC 140) and taken to Cape Cod, Massachusetts (Uboat.net).
This patrol began in St. Nazaire on the 19th of April and ended there on the 24thof June. It was characterized by more attacks on the submarine than the U-boat itself delivered. On the 3rd of May the sub was driven away from a steamer by a corvette escort which damaged the periscope and other equipment with two depth charges. When the boat penetrated the Gulf of St. Lawrence an aircraft dropped three depth charges and the minesweeper HMCS Medicine Hat followed up. This created technical issues on the sub. (Wynn, Vol. 2, p.30).
Thurmann believed he had hit a third ship after his two successes, but it is unconfirmed. In the Bay of Fundy the boat positioned itself to observe ship traffic in and out of St. John, New Brunswick, and Thurmann was convinced that it was not a staging area for convoys. The boat had less than a month’s provisions on the 2ndof June when it sank the Mattawin, and so when the men found an empty lifeboat the following day they stripped it – gratefully – of supplies.
While en route home the boat briefly dog-legged to find a Halifax-originating convoy but the following day, the 11th of June, the submarine was caught by a flying boat whilst on the surface and forced to dive and withstand depth charges. Further damaged, U-553 made for France (Wynn, Vol. 2, p.30).
Karl Thurmann was born in September 1909 and was a member of the Crew of 1928. He was lost four days after leaving France on about 20 January 1943 after sending a message “Periscope not clear.” He and all hands were never heard again (Uboat.net). His early training included service aboard the light cruisers Emden and Koln until April 1940 when he joined U-Boats. He was a commander-in-training of U-29 before commissioning U-553 in December, 1940.
Thurmann was the only commander of U-553, and together the accomplished 344 days over 10 patrols. During that time the submarine and its commander sank 13 ships for 62,315 tons and damaged two others for 15,273 tons. On 24 August 1942 Karl Thurmann was awarded the Knights Cross.
SOURCES:
Busch, Rainer and Röll, Hans-Joachim, “German U-Boat Commanders of World War II, A Biographical Dictionary,” Greenhill Books, London and Naval Institute Press, Annapolis, MD, 1999
Helgasson, Guðmundur and Kolbicz, Rainer, www.uboat.net, 2015
Högel, Georg, “U-Boat Emblems of World War II 1939 – 1945,” Schiffer Military History, Atglen, PA, US, 1999
Kurowski, Franz, Knights of the Wehrmacht, Knight’s Cross Holders of the U-Boat Service,” Schiffer Military/Aviation History, Atglen, PA, US, 1995
Mason, Jerry, www.uboatarchive.net – for the KTB or war diary of this patrol, 2015
Niestlé,Axel, “German U-Boat Losses During World War II – Details of Destruction,” Naval Institute Press, Annapolis, MD, 1998