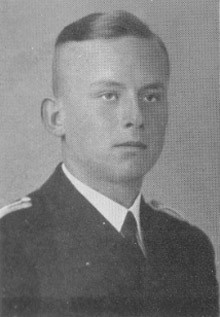 Klaus Hänert, who
brought U-550 on a 7-day patrol of New England waters between the 9th
and 16th of April 1944 and was ultimately sunk there. He survived the
war. Photo courtesy of http://uboat.net/men/commanders/401.html.

Kapitänleutnant Klaus
Hänert brought his command U-550 on a dangerous patrol of New England
waters between the 9th and 16th of April 1944. During
that time he managed to sink an Allied ship and in turn had his submarine
destroyed along with most of the men aboard, on the 16th 70 nautical
miles south of Nantucket.
U-550 entered the region the
customary way: from a point about 300 miles south of Cape Sable, Nova Scotia,
heading west. The boat motored west from the 9th until the 13th
of April, at which point it stopped about 200 miles south of Nantucket and
began motoring north towards that island, which represented a turning point for
shipping crossing the Atlantic to and from New York. The 14th and 15th
were spent in the same general position, then on the 16th Hänert
headed north to within 70 miles of Nantucket Lightship. There he found what he
was looking for: a convoy.
The large T-3 type tanker
Pan Pennsylvania (11,017 tons) had only been completed in 1943 in Norfolk. It
joined Convoy CU 21 in New York and the group of ships protected by US Navy
destroyer escorts left New York harbor on the 15th of April bound
for Barry, in Wales. The Pan Pennsylvania’s cargo was 140,000 barrels of
gasoline (80 octane) as well as some planes on deck (Uboat.net). There were 28
merchant ships in the convoy and they were protected by “Escort Division 21.5,
consisting of Coast Guard-manned destroyer escorts (DE) USS Poole (the flag
ship), USS Kirkpatrick, USS Harveson, USS Peterson, USS Joyce, and was
reinforced by one Navy DE the USS Gandy” (Munro, http://soundunderwatersurvey.com/wrecks/u-550/the-sinking-of-the-u-550/.

The escort could not prevent
the Pan Pennsylvania from being struck by U-550’s torpedo, which burst a hole
in the side of the ship and disabled her steering equipment. Some panic ensued
which Captain Delmar Melum Leidy was only partially able to control – since the
ship was still moving he managed to prevent one lifeboat from being launched,
but another capsized, tossing its men into the cold North Atlantic. After 15
minutes the tanker came to a stop and some 56 of her men made it into the two
remaining lifeboats and three rafts.

The Allied counterattack on
U-550 was swift and decisive. The USS Joyce (DE 317), USS Gandy (DE 764) and
USS Peterson (DE 152) managed by depth charges to force U-550 to the surface at
9:58 local time (Munro). All of the US Navy’s guns were trained and fired on
the sub as the Germans rushed to their guns. Four minutes later USS Gandy
rammed the sub some 30 feet from the stern, while keeping up a stream of fire.
A minute later, at 10:03 am, Hänert and his men surrendered.

U-550 after being
surrendered but before being completely abandoned. Only 12 of those in the
photograph would survive, and of those two would die from wounds. Photo
courtesy of Mark Munro, http://soundunderwatersurvey.com/wrecks/u-550/the-sinking-of-the-u-550/,
from the US Coast Guard site http://www.uscg.mil/history/uscghist/U550.asp

It is believed that
scuttling charges were set in U-550 as an explosion was heard by the Americans.
At 10:05 (two minutes after surrender), the Germans were ordered to abandon
ship. Twenty-five minutes later the submarine sank stern-first, and at 10:45 am
USS Joyce retrieved twelve living German sailors and the body of one dead
mariner. Hänert was among the survivors rescued.
From the Pan Pennsylvania
the 56 survivors were picked up by USS Peterson and possibly another destroyer
escort, which remained with the convoy, as the survivors were taken to Londonberry,
Ireland, landing on the 26th of April. Pan Pennsylvania continued to
drift, partially on fire from ricocheted shells from the US destroyers.
Ultimately several vessels fired into here the following day to sink the hull:
USCGC General Greene, USS Hazel, USCGC Harriette Lane, and USS Sagamore, as
well as USS SC-1338 and USS Rescue (Munro),
however they waited until the 18th of April for airplanes to
bomb and ultimately sink the large ship.

Though it is not clear which
vessel brought them there, it appears the German prisoners were taken to the US
Navy base in Newport, Rhode Island, as Machinist’s Mate Gunther Heder was buried
in the Rhode Island Historical Cemetery (John Stanford provided Mark Munro with
a photo of the gravesite). Another sailor, Machinist Wanz, was buried at sea on
the 18th of April from the USS Joyce, Captain Robert Wilcox,
commanding (Munro). 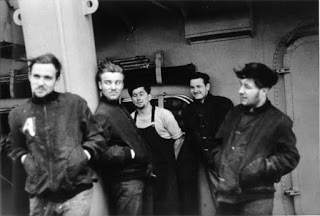 German naval survivors of
U-550’s destruction aboard USS Joyce. They appear justifiably relieved to be
alive. Photo courtesy of Mark Munro, from http://soundunderwatersurvey.com/wrecks/u-550/the-sinking-of-the-u-550/,
from the US Coast Guard site http://www.uscg.mil/history/uscghist/U550.asp
Klaus Hänert was born
in February 1918 and survived the war, living until 2003 and age 84. He joined
the Navy in the Crew of 1936 (Olympia Crew), moving to the destroyer Z-6
Theodor Riedel until June 1940 (Uboat.net). After a stint ashore he joined the
Z-15 Erich Stienbrinck to the time of Pearl Harbor, December 1941.
After joining U-Boats Hänert
served as 2nd Watch Officer under ace Merten on U-68 to July 1942.
During a single patrol to the Caribbean they sank 7 ships of over 50,000 tons
together (Uboat.net). Hänert continued with Merten for two more patrols.
After work-up and further training he commissioned U-550 in July 1943 before
applying more training in the Baltic for half a year.
On its final patrol U-550
departed Kiel Germany on the 6th of February 1944 and was at first
sent for weather-reporting functions off Iceland, Greenland and Newfoundland
(Wynn, Vol. 2, p.27).  On the 22nd
of February a Catalina aircraft caught the boat south of Iceland and two
Germans were killed in a firefight, but the boat survived. By mid-April she had
moved to the US northeast coast and it was on its 71st day of the
patrol that the boat was sunk. Forty four men were killed. The Pan Pennsylvania
was the only ship which Hänert sank, and he received no decorations.
There are three postscripts
to the loss of U-550: Hanert was held as POW until 1947. Some of his men are
believed to have survived in the forward torpedo tubes for as long as several
weeks. Bodies of survivors were found above the wreck for weeks afterwards –
three of them. Body 1 on 5 May, said to have died about 1 May (the sub was sunk
16 April), body 2 on 11 May with an escape lung and life jacket on in a rubber
raft. Body 3 salvaged by USS SC 630 had been in the water more than 18 days.
Source: https://en.wikipedia.org/wiki/German_submarine_U-550.

Finally, on 23 July a team
of adventurers and historians lead by an attorney from New Jersey named Joe
Mazraani discovered the wreck of U-550 about 70 nautical miles south of
Nantucket. The seven divers want to find survivors of the German and US vessels
involved in the U-boat’s final battle. Source: https://en.wikipedia.org/wiki/German_submarine_U-550