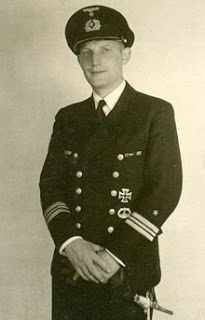 Hans-Heinrich Giessler who patrolled New England for 11 days in U-455 during May 1942. Photo courtesy of http://uboat.net/boats/patrols/patrol_893.html
KorvettenkapitänHans-Heinrich Giessler patrolled off New England in U-455 for 11 days total between the 10th of May and the 31st of the same month in 1942. On the 10th the boat headed west from a position south of Cape Sable, Nova Scotia for five days until the 15th, when it exited west of Montauk, New York. Aside from a dip south on the 13th when south of Cape Cod Canal and a turn north the following day, the trajectory was basically westward.
Between May 19th, 20th and 21st the U-boat returned to the region briefly ducking into the area south of Montauk. Then on the 30th U-455 again returned to the waters well south of Nantucket until it exited south of Cape Sable a day later.
Giessler and his crew sank two Allied ships on this patrol, one before and one after the New England portion: The British Workman on the 3rd of May and the Geo. H. Jones on the 11th of June. The boat left St. Nazaire as part of a group of 13 boats heading for Canada and the US on the 16th of April and returned there on the 16th of June 1942. On the first of May Giessler learned of a convoy 80 miles southwest of Cape Sable but was too far east at the time and didn’t make contact.
Though U-455 teamed up with U-553, U-588 and U-593 (Kelbling) the convoy was close in shore and the group dispersed (Wynn, Vol. 1, p. 302). While U-455 was off New York it attacked a large passenger ship without result on the 18th of May. On the 21stshe joined seven other boats to create Padfinder group some 400 nautical miles east of New York to determine shipping patterns.
Hans-Heinrich Giessler was born on 12 January 1911 in Berlin and not only survived the war but is still believed to be alive in October, 2015, aged 104 years. He sank two ships – both on this patrol – of nearly 14,000 tons and was decorated with the Iron Cross 1stClass. He was a member of the Crew of 1931. After his war four patrols Giessler moved into armaments until February 1945 when he served as 1st Watch Officers of the Z-20 Karl Galster until war’s end (UBoat.net).
SOURCES:
Busch, Rainer and Röll, Hans-Joachim, “German U-Boat Commanders of World War II, A Biographical Dictionary,” Greenhill Books, London and Naval Institute Press, Annapolis, MD, 1999
Helgasson, Guðmundur and Kolbicz, Rainer, www.uboat.net, 2015
Högel, Georg, “U-Boat Emblems of World War II 1939 – 1945,” Schiffer Military History, Atglen, PA, US, 1999
Kurowski, Franz, Knights of the Wehrmacht, Knight’s Cross Holders of the U-Boat Service,” Schiffer Military/Aviation History, Atglen, PA, US, 1995
Mason, Jerry, www.uboatarchive.net – for the KTB or war diary of this patrol, 2015
Niestlé,Axel, “German U-Boat Losses During World War II – Details of Destruction,” Naval Institute Press, Annapolis, MD, 1998