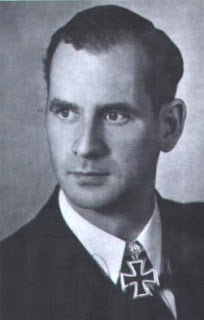 Otto von Bülow, who brought U-404 on its second patrol to New England for 8 days in May and June 1942. Photo courtesy of http://uboat.net/men/buelow.htm
Kapitänleutnant(later Korvettenkapitän) Otto von Bülow brought his command U-404 on its second incursion into New England waters for eight days between the 26thof May and the 29th of June, 1942. U-404 entered the region about 150 miles south of Cape Sable, Nova Scotia heading westwards. Then on the 27thof May von Bülow turned north and approached the cape within 100 miles before backtracking south for the next two days. He exited the region south of Cape Sable on the 30th of May.
On the 27th of June, during his return leg, von Bülow brought U-404 back through New England waters, sinking the Moldanger south of Block Island on the same day. Then the submarine headed east and out of the region on the 29th of June, also well south of Cape Sable. In the interim between leaving and returning to the region U-404 sank 6 ships of some 25,000 tons: the Alcoa Shipper on 30 May closer to Bermuda, West Notus on 1 June, Anna two days later, Ljubica Matkovic on 24 June, and the Nordal and Manuela on the 25th near Cape Hatteras.
The Moldanger was a 6,827-ton Norwegian motor ship bound from Buenos Aires to New York with 8,700 tons of general cargo. Out of 44 men on board, 13 were killed in the attack and the balance of 30 were rescued by three ships: HMCS Buctouche (K-179) retrieved 15 of them. Six men on a small gig were rescued by USS PC-495 and taken to Cape May, New Jersey. Nine survivors on two rafts drifted aimlessly for 48 long days before the Norwegian ship Washington Express came upon them on August 14thon the way to the Azores with the currents. They had survived on fish and turtles (Uboat.net). One of the injured in the lifeboats died en route to shore and was buried at sea.
This patrol began in Brest France on the 6th of May and ended in St. Nazaire on 14 July 1942. U-404 was part of a group of seven U-boats called Padfinder which patrolled 400 miles southeast of New York, trying to determine trading patterns to and from that port and the Americas. The West Notus was sunk by scuttling charges set by a German boarding party. Shortly after the attack on the Moldanger U-404 was attacked by an Allied aircraft and damaged, necessitating a return to base in France (Wynn, Vol. 1, p.266).
Otto von Bülow was born in Wilhelmshaven on the 16th of October 1911 and lived until 2006 at the age of 94. In April 1943 he was awarded the Knights Cross with Oak Leaves and a year later the War Merit Cross 2nd Class with Swords. A member of the Crew of 1930 he served aboard the Deutschland and the Schleswig-Holstein as well as in naval anti-aircraft detachments. He joined U-boats in 1940, commanding the training boat U-3.

In August 1941 von Bülow commissioned U-404 on which he was to stake his reputation until he handed over command to his erstwhile 1st Watch Officer Oberleutnant zur See Adolf Schönberg, who was born in Babylon, New York in 1918. The boat was then lost on its first patrol under the new commander, on the 28th of July, 1943.

Overall von Bülow sank or damaged 17 Allied merchant and naval ships of roughly 89,000 tons. After some months in British captivity following command of the Electro-U-boat U-2545 von Bülow joined the new German navy in 1956 and retired from it in 1970.