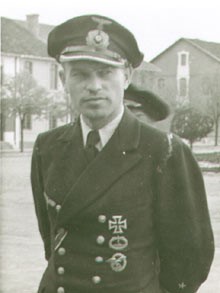 Johannes Liebe who brought U-332 on an 11-day patrol of New England in June 1942. Photo courtesy of: http://uboat.net/men/commanders/731.html
KapitänleutnantJohannes Liebe brought his command U-332 on an 11-day patrol of the New England coast, moving close to the eastern end of Long Island New York and Block Island, Martha’s Vineyard and Nantucket, between the 12th and 22ndof June, 1942.
The patrol began some 300 miles south of Cape Sable Nova Scotia heading westwards on the 12thof June. For two days the sub motored west than on the 14th it turned north to a point about 200 miles south of Nantucket. From there it moved close inshore to the eastern point of Long Island on the 18th and 19th, before patrolling east along the south coasts of Block Island, the entrance to Buzzard’s Bay and the Cape Cod Canal, and Martha’s Vineyard before turning south of Nantucket and then west to exit the area on the 22nd.
The patrol began in La Pallice France on the 24th of May 1942 and ended there 70 days later on the 1st of August. After leaving New England Liebe sank the US freighter Raphael Semmes south of Bermuda (he was solicitous of the wounded Americans’ well being), and on the way back to Europe the Leonidas M. of Greece on the 19th of July. Liebe took two officers on board his submarine, something frowned upon after the Laconia Order. Towards the end of July U-332 received fuel from U-461 west of the Azores Islands (Wynn, Vol. 1, p. 221).
Johannes Liebe was born in July 1913 in Saxony and survived the war until age 69 and October 1982. A member of the Crew of 1933, U-6 was one of his early commands. His earlier experience was with Naval Airfields (Uboat.net). After March 1941 he served under Schultze in U-48. He took command of U-332 after work-up in June 1941. Liebe was a successful commander, with eight ships of over 46,000 tons to his credit. The end of the war found him working on torpedo testing, and though he was made POW, he was released in end July 1945.
SOURCES:
Busch, Rainer and Röll, Hans-Joachim, “German U-Boat Commanders of World War II, A Biographical Dictionary,” Greenhill Books, London and Naval Institute Press, Annapolis, MD, 1999
Helgasson, Guðmundur and Kolbicz, Rainer, www.uboat.net, 2015
Högel, Georg, “U-Boat Emblems of World War II 1939 – 1945,” Schiffer Military History, Atglen, PA, US, 1999
Kurowski, Franz, Knights of the Wehrmacht, Knight’s Cross Holders of the U-Boat Service,” Schiffer Military/Aviation History, Atglen, PA, US, 1995
Mason, Jerry, www.uboatarchive.net – for the KTB or war diary of this patrol, 2015
Niestlé,Axel, “German U-Boat Losses During World War II – Details of Destruction,” Naval Institute Press, Annapolis, MD, 1998