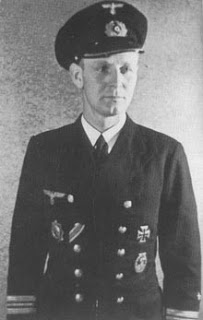 Johann-Heinrich Fehler, who transited New England waters in U-234
during mid-May 1945 in order to surrender in Portsmouth, NH on the 19th.
Photo courtesy of http://uboat.net/men/commanders/272.html
Kapitänleutnant Johann-Heinrich Fehler
brought his command, U-234 in the last wartime patrol of New England waters
when he delivered the submarine to his US captors in Portsmouth naval base, New
Hampshire on the 19th of May 1945. He must therefore have transited
the Gulf of Maine from the region south of Cape Sable, Nova Scotia, between the
15th, 16th, 17th, and 18th of May.
This patrol began in Kristiansand Norway
on the 16th of April 1945 and lasted 34 days. According to Wynn
(Vol. 1, p.170), on the 18th of April the U-boat utilized the
passage between the Faroes Islands and Iceland thereafter in order to access
the North Atlantic and the Americas. On the 5th of May, a day after
Donitz issued his order to cease operations and return to Norway, the boat did
not receive the message.

On the 8th or 10th
of May the men on U-234 learned of the capitulation of Germany and the order to
surrender, and two Japanese officers returning from Germany to Japan killed
themselves rather than surrender, and were buried at sea. Apparently Fehler did
not believe the authenticity of the surrender message, and had to be convinced
of it by fellow U-boat skipper Fritz Steinhoff in U-873.
On the 14th of May, after
crossing the Atlantic in order to surrender to the Americans rather than the
British, U-234 gave itself up to the US Navy destroyer escort USS Sutton just
east of the Flemish Cap (Wynn). Apparently Fehler had been playing a
cat-and-mouse game with the Canadians – informing them that he was making for
Halifax, when in fact he set a course for Norfolk, Virginia. The Americans
caught onto the ruse and sent two more destroyers to intercept.

These vessels then escorted the U-boat
to the US submarine base in Portsmouth NH near Kittery Maine. While the US Navy
crew was taking over the U-boat a sailor accidentally fired one of the German’s
pistols inside the submarine, and the bullet hit another US sailor in the lower
back, or buttocks.

When U-234 arrived in Portsmouth Lower
Harbour the crew, who were by then Prisoners-of-War, were transferred to US
Coast Guard cutter Argo, under command of Lieutenant Winslow, whose treatment
of the Germans was much more harsh than that by the Sutton men had been.
Perhaps to impress the swarm of reporters, Winslow had a visible argument with
Fehler as the POWs were disembarking in Portsmouth, and the American captain
became a darling of the press (Scalia). 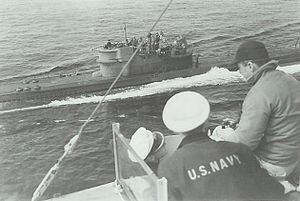 The view of surrendered U-234 from the
destroyer escort USS Sutton (DE 771), May 1945. U-Boat commander Fehler is seen
in the white cap with black trim to the left. Photo source: https://en.wikipedia.org/wiki/German_submarine_U-234
Although it is not necessarily germane
to this author’s research, the unique resupply mission to Japan and the cargo
and personnel aboard the U-234 may be of interest to readers. Wikipedia
describes the eclectic group of passengers thus:
“U-234 was
carrying twelve passengers, including a German general, four German naval
officers, civilian engineers and scientists and two Japanese naval officers.
The German personnel included General Ulrich Kessler of the Luftwaffe, who was to take over Luftwaffe liaison duties
in Tokyo; Kay
Nieschling, a Naval
Fleet Judge Advocate who was to rid the German diplomatic corps in Japan of the
remnants of the Richard Sorge spy ring; Dr. Heinz Schlicke, a specialist in radar, infra-red, and countermeasures and
director of the Naval Test Fields in Kiel (later recruited by the USA in Operation Paperclip [utilizing foreign scientists
to complete an atom bomb]); and August Bringewalde, who was in charge of Me 262
production at Messerschmitt. The Japanese passengers were Lieutenant Commander
Hideo Tomonaga of the Imperial Japanese Navy, a naval architect and
submarine designer who had come to Germany in 1943 on the Japanese submarine I-29, and Lieutenant Commander
Shoji Genzo, an aircraft specialist and former naval attaché.”
Fehler and other officers and men were
taken to the Charles Street Jail for common criminals in Boston. Interrogation
was considered harsh, in part because of U-234’s valuable cargo and the
important passengers on board, some of whom could have enabled the Japanese to
mass-produce Messerschmitt aircraft to the detriment of US and Allied forces
still fighting them.
Wikipedia describes the unusual cargo
which the Americans found (The cargo was not concealed – after all it was a
cargo-carrying U-Boat) concealed, and later used) thus:
“A
classified US intelligence summary written on 19 May listed U-234‍ ‘​s cargo as including drawings,
arms, medical supplies, instruments, lead, mercury, caffeine, steels, optical
glass and brass.[8] The fact that the ship carried .5 short tons
(0.45 t) of uranium oxide remained classified for the duration of
the Cold War.
Author and historian
Joseph M. Scalia claimed to have found a formerly secret cable at Portsmouth
Navy Yard which stated that the uranium oxide had been stored in gold-lined
cylinders rather than cubes as reported by Hirschfeld; the alleged document is
discussed in Scalia’s book Hitler’s Terror Weapons. The exact
characteristics of the uranium remain unknown; Scalia and historians Carl Boyd and
Akihiko Yoshida have speculated that rather than being weapons-grade material
it was instead intended for use as a catalyst in the production of
synthetic methanol for aviation fuel.
The 1,200
pounds (540 kg) of uranium disappeared. It was most likely transferred to
the Manhattan Project‘s Oak
Ridge diffusion
plant. The uranium oxide would have yielded approximately 7.7 pounds
(3.5 kg) of U-235 after processing, around 20% of what would have been
required to arm a contemporary fission weapon.”
(https://en.wikipedia.org/wiki/German_submarine_U-234)
(Derek Waller’s Note: This bit (above)
from Wikipedia is contentious. Sometimes it refers to uranium oxide and
sometime to uranium – which is completely different. The uranium oxide was
definitely not weapons-grade material. The story about the cubes is complete
make-believe. The document relating to the gold-lined cylinders exists (I have
a copy) – and it is not “alleged”).

Johann-Heinrich Fehler was born in
Berlin in September 1910 and was thus 31 when he surrendered. A member of the
Crew of 1936, he survived the war and lived until May 1993 and the age of 82. He
served aboard the highly successful German merchant raider Atlantis under
Bernard Rogge from December 1939 to December 1941. Then Fehler joined Naval
High Command North to March 1942.
For the next year he was a Group Officer
at the naval college. He joined U-boats in March 1943 and went through the
commander’s course in the 24th Flotiilla. After workup from December
1943 he took command of U-234 from March 1944 until the surrender (Busch &
Roll, Uboat.net). Fehler was decorated with the Iron Cross 1st and 2nd
Class as well as the Merchant Raider Badge and the German Cross in Gold.

U-234’s surrender with her
high-ranking German passengers made it a major news event. Reporters swarmed
over the Navy Yard and went to sea in a small boat for a look at the
submarine.” (Wikipedia, Ibid.) Fehler and his men were
transferred amongst various POW camps (almost certainly including Fort Devens,
Massachusetts, Fort Hunt, Virginia, and George G. Meade in Maryland – Scalia),
before returning to Europe, first to Brussels and then elsewhere in Belgium.
They were released in their home country during 1947.

The US Navy carried out some limited trials
with U-234 until March 1946, after which it was taken out of service and
retained for explosive tests. Finally on 20th November 1947, the submarine USS
Greenfish, SS 351, torpedoed and sank her in about 850 feet of water, roughly
40 nautical miles northeast of Provincetown and east of Gloucester
Massachusetts, in position 42°37’N / 69°33’W.