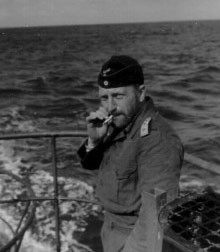 Paul Siegmann who brought U-230 to New England for two two-day transits in July and August 1943. Photo courtesy of http://uboat.net/men/commanders/1194.html
Kapitänleutnant Paul Siegmann brought his command U-230 to New England on two short two-day transits in 1943. The first was a westbound passage from about 300 miles south of Cape Sable Nova Scotia to about 250 miles south of Montauk, New York. Then on his return voyage Siegmann transited again eastbound from the 2nd of August to the 3rd, from far south of Montauk to far south of Cape Sable, on his way back to Europe.
The patrol lasted 66 days, beginning in Brest France on the 5th of July and ending there on the 8th of September 1943. The primary purpose of the mission was to sow mines off the Chesapeake Bay, which Siegmann accomplished on the 31stof July by planting 8 TMC-type mines there. These had no effect as they were neither discovered nor accidentally detonated by any ships.
On her way to France U-230 had refueling concerns. Siegmann was ordered to meet U-117 for fuel between Bermuda and Azores but U-117 did not rendezvous, so U-634 provided some fuel to U-230 on the 17th of August. Together they were ordered to meet U-847 800 miles southwest of the Azores. When the rendezvous and refueling were complete U-847 radioed to base to inform them as much, and was promptly tracked down and sunk.
The 1st Watch Officer of this patrol was Herbert A. Werner, author of the book Iron Coffins, who retired to southern Florida and corresponded with this author. Paul Siegmann was born in Hamburg in May 1913 and survived the war, living until 1986 and the age of 73. He was in a Crew of 1935 and began his naval career as 1st Watch Officer of the torpedo-boat Greif to March 1941, followed by U-boat training.
Siegmann commanded U-612 in May to June 1942 but on the 8th of June the submarine was sunk in a collision with U-444 (Busch & Roll, p.244). Siegmann then commissioned U-230 in October 1942 and serveda baoard her until August 1944. Thereafter he commanded U-2507 from September 1944 to the capitulation in May 1945. Overall Siegmann patrolled 253 days and sank four shipos for 6,453 – three of them were Allied naval ships. He was awarded the German Cross in Gold as well as the Iron Cross 1stand 2nd Class.
SOURCES:
Busch, Rainer and Röll, Hans-Joachim, “German U-Boat Commanders of World War II, A Biographical Dictionary,” Greenhill Books, London and Naval Institute Press, Annapolis, MD, 1999
Helgasson, Guðmundur and Kolbicz, Rainer, www.uboat.net, 2015
Högel, Georg, “U-Boat Emblems of World War II 1939 – 1945,” Schiffer Military History, Atglen, PA, US, 1999
Kurowski, Franz, Knights of the Wehrmacht, Knight’s Cross Holders of the U-Boat Service,” Schiffer Military/Aviation History, Atglen, PA, US, 1995
Mason, Jerry, www.uboatarchive.net– for the KTB or war diary of this patrol, 2015
Niestlé, Axel, “German U-Boat Losses During World War II – Details of Destruction,” Naval Institute Press, Annapolis, MD, 1998