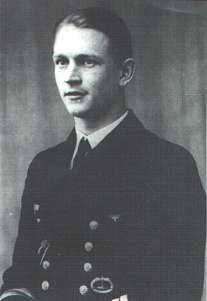 Amelung von Varendorff, commander of U-213 which spent 23 days in New England waters from 12 May to 6 June 1942 and survived an attack by an Allied destroyer. Photo courtesy of http://uboat.net/men/varendorff.htm
Oberleutnant zur See Amelung von Varendorff took U-213, a type VIID minelayer, into a complex 23-day patrol of New England waters and was the first one to probe the Bay of Fundy in May of 1942. Though no ships were sunk on this patrol, the submarine was attacked by an Allied destroyer on the 15th of May west northwest of Cape Sable and survived (the sub was not to be so fortunate two and half months later).
On the 12thof May von Varendorff motored northwest from a point south of Cape Sable Nova Scotia and into the Gulf of Maine. On the 13th he passed west of Yarmouth and on the 14th entered the Bay of Fundy, infamous for its massive tides and currents. There von Varendorff effectuated a daring aspect of his mission by landing a German agent, Alfred Langbein in New Brunswick, near Saint Martins, northeast of St. John and on the north shore of the Bay of Fundy. The precise location was off the Great Salmon River, 10 miles east of St. Martins.
Labeled Operation Grete, the purpose was to have the agent provide German handlers with information on convoys, however it was not a success. Langbein moved to Ottowa as Alfred Haskins of Toronto, then surrendered in September 1944 when he had exhausted his funds (the Canadians sent him back to Germany after the war).
Then on the 15thU-213 was surprised in fog on the surfaced by an Allied destroyer which slightly damaged it with depth charges. The submarine managed to escape to the south and exited the area southeast of Cape Sable on the 18th of May. U-213 then returned to the waters south and southwest of Cape Sable, where the sub performed circular patrols between the 22nd of May and 6thof June in a dense cluster about 300 miles southeast of Nantucket. This was part of Operation Padfinder, to determine the whereabouts of Allied ships leaving and arriving in New York from Latin America.
Von Varendorff was born in December 1913 in Kiel and sank no ships as a commander. He was a member of the Crew of 1935 and was 2nd Watch Officer on the famous attack on Scapa Flow by Gunther Prien in U-47. On his patrol following landing the agent in Canada the submarine was barely a week out of France and tracking Convoy OS 35 when it was attacked west of the Azores Islands and sunk by depth charges from HMS Erne, HMS Sandwich, and HMS Rochester (L 50) on 31 July, 1942. Von Varendorff was 28. All 50 submariners perished. Von Varendorff earned the U-Boat War Badge of 1939.
SOURCES:
Busch, Rainer and Röll, Hans-Joachim, “German U-Boat Commanders of World War II, A Biographical Dictionary,” Greenhill Books, London and Naval Institute Press, Annapolis, MD, 1999
Helgasson, Guðmundur and Kolbicz, Rainer, www.uboat.net, 2015
Högel, Georg, “U-Boat Emblems of World War II 1939 – 1945,” Schiffer Military History, Atglen, PA, US, 1999
Kurowski, Franz, Knights of the Wehrmacht, Knight’s Cross Holders of the U-Boat Service,” Schiffer Military/Aviation History, Atglen, PA, US, 1995
Mason, Jerry, www.uboatarchive.net – for the KTB or war diary of this patrol, 2015
Niestlé,Axel, “German U-Boat Losses During World War II – Details of Destruction,” Naval Institute Press, Annapolis, MD, 1998