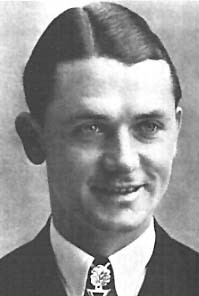 Rolf Mützelburg who patrolled New England waters for 4 days in April 1942, sinking four ships outside of the area. Photo courtesy of http://uboat.net/men/muetzelburg.htm
Kapitänleutnant Rolf Mützelburg took his submarine U-203 on a four-day east-to-west patrol of New England waters between the 3rd and 6th of April, 1942. The U-Boat entered New England waters south of Cape Race, Nova Scotia and exited four days later west of Montauk, New York, on the 6th without sinking any ships while there.
Four days later, on the 10thMützelburg sank the San Delfino and in the next four days also damaged the Harry F. Sinclair Jr. and Stanvac Melbourne and sank the Empire Thrush, all off the Cape Hatteras area. U-203 left Brest France on the 12th of March as part of the fourth wave of Paukenschlag U-Boats sent to attack the US coast after Pearl Harbor. About two weeks into the patrol she was refueled by U-A west of the Azores Islands. The boat returned to Brest on the 30thof April.
Mützelburg was born in 1913 and would die bizarrely while diving from the conning tower of U-203 near the Azores on the 11th of September 1942. He was 29 and struck the saddle tank when the submarine lurched. Earlier that year he was awarded the Knights Cross with Oak Leaves for the 22 ships he sank or damaged for nearly 100,000 tons.
SOURCES:
Busch, Rainer and Röll, Hans-Joachim, “German U-Boat Commanders of World War II, A Biographical Dictionary,” Greenhill Books, London and Naval Institute Press, Annapolis, MD, 1999
Helgasson, Guðmundur and Kolbicz, Rainer, www.uboat.net, 2015
Högel, Georg, “U-Boat Emblems of World War II 1939 – 1945,” Schiffer Military History, Atglen, PA, US, 1999
Kurowski, Franz, Knights of the Wehrmacht, Knight’s Cross Holders of the U-Boat Service,” Schiffer Military/Aviation History, Atglen, PA, US, 1995
Mason, Jerry, www.uboatarchive.net – for the KTB or war diary of this patrol, 2015
Niestlé,Axel, “German U-Boat Losses During World War II – Details of Destruction,” Naval Institute Press, Annapolis, MD, 1998