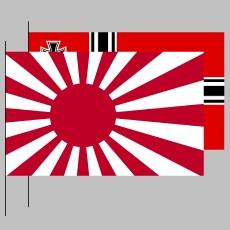 The emblem of U-183 which ultimately voyaged to Singapore. The same emblem was used by U-1224 which became the Japanese submarine RO 501 in 1944. Image courtesy of http://uboat.net/special/emblems/emblem376.html
FregattenkapitänHeinrich Schäfer brought his command U-183 into New England on a brief incursion between the 13th and 16thof November, 1942. From a point roughly 100 miles south of Cape Sable Nova Scotia the boat headed southwest until the 14th, then due north to a point 50 miles west of Cape Sable, then southeast and out of the region on the 16th.
The patrol began in Kiel Germany on the 19th of September and ended 96 days later in Lorient, on the 23rd of December, 1942. Only one ship was sunk during the mission – the British ship Empire Dabchick southeast of Cape Breton from Convoy ONS 146 on the 3rd of December. This was the U-boat’s first patrol. During it U-183 took part in two wolfpack patrol lines: Luchs in early October west of Ireland which was to hunt down a westbound convoy HX 209. On 5 October U-183 was detected and bombed by four depth charges from a US Navy Catalina of Squadron VP 73, Lt. G. F. Swanson (Wynn, Vol. 1, p.137).
According to U-Boat.net the sub also participated in the Panther group between 7 and 11 October. Once in Canadian waters the boat joined up with U-518 to investigate the Belle Isle Strait north of Newfoundland. Then it patrolled off Nova Scotia and Newfoundland, where it met Convoy ONS 146 and sank the Empire Dabchick. After refueling from U-460 north of the Azores the boat returned to France just before Christmas.
Heinrich Schäfer was born in January 1907 in Bremerhaven and was a member of the Crew of VII/1925. Early in his career he served on the gunnery target ship Mars up to June 1941, after which he joined U-boats. He trained in the 26thand 3rd Flotillas in 1941 – 1942 and took over command of U-183 in April 1942 until November 1943.
He was in the 2ndFlotilla at the end of 1943 and then commander of UIT 23 from December 1943 to January 1944. He died outside Tokyo of illness (paratyphus and appendicitis, Uboat.net) on January 7th, 1944. He was 36. Schäfer sank two ships of 8,582 tons and received no decorations.
The IUT 23 was the ex-Italian submarine Reginaldo Giuliani, which was sunk in the Straits of Malacca, SE Asia by British submarine HMS Tallyho – there were 14 survivors on 14 February 1944. U-183 was sunk on 23 April 1945 in the Java Sea by the US submarine USS Besugo – one survived (Uboat.net).
SOURCES:
Busch, Rainer and Röll, Hans-Joachim, “German U-Boat Commanders of World War II, A Biographical Dictionary,” Greenhill Books, London and Naval Institute Press, Annapolis, MD, 1999
Helgasson, Guðmundur and Kolbicz, Rainer, www.uboat.net, 2015
Högel, Georg, “U-Boat Emblems of World War II 1939 – 1945,” Schiffer Military History, Atglen, PA, US, 1999
Kurowski, Franz, Knights of the Wehrmacht, Knight’s Cross Holders of the U-Boat Service,” Schiffer Military/Aviation History, Atglen, PA, US, 1995
Mason, Jerry, www.uboatarchive.net– for the KTB or war diary of this patrol, 2015
Niestlé, Axel, “German U-Boat Losses During World War II – Details of Destruction,” Naval Institute Press, Annapolis, MD, 1998