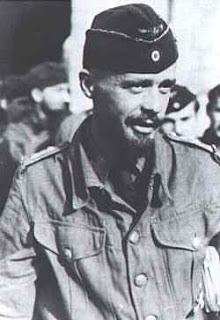 Albrecht Achilles, who brought U-161 on a long 33-day patrol of New England waters in April and May 1943. Photo courtesy of http://uboat.net/men/achilles.htm.
Kapitänleutnant(later Korvettenkapitän posthumously) Albrecht Achilles brought his command U-161 into New England waters three times for 33 days between 6 April and 19 May 1943. It was the first time in four or five months since U-183 had left those waters, and the longest patrol in New England waters up to that time. The patrol was a complex and busy one, and can be broken down into three separate incursions:
1)    On 6 April starting about 250 miles south of Cape Sable the sub entered the region heading southwest for a day, then northwest. Then until the 9th of April U-161 proceeded straight west, to a point southeast of Nantucket. From there a day’s voyage north, then southwest to hold a position off the New York shipping lanes for three days, then steadily southeast until the 20th of April and the border with Canadian waters. For 10 days between 20 and 30 April the sub headed northwest , held a position southeast of Nantucket for three days again (23-26 April), then again until the 28th the sub held its position, Finally on the 29th it turned east and on the 30 exited the region about 200 miles south of Cape Sable, Nova Scotia.
2)    This was a short 3-day passage from 300 miles south of Cape Sable NS to a point about 100 miles further to the southwest, when the sub exited the region en route to the waters off Bermuda on the 8th of May.
3)    On the 15thof May roughly 300 miles south of Nantucket U-161 returned from the Bermuda area and was heading north for a day until on the 17th it turned southwest and almost out of the area. Then Achilles brought her east in a straight line for the four days between the 17th and 20th, exiting the area about 300 miles south of Cape Sable heading east.

U-161 acted in concert with U-174 and at the outset of the patrol had rendezvous with Axis blockade runners Regensburg, Pietro Orseolo, Karin and Irene. They met the ships west of the Azores and radioed their coordinates to headquarters. On the 25th of April both boats encountered an eastbound convoy south of Cape Sable NS but were driven off by escorts (Wynn, Vol. 1, p.132).

Despite all of Achilles’ vigilance and efforts, he was only able to sink a single 255-ton ship on this 87-day patrol, which began in Lorient on 13 March and ended on 7 June 1943. The ship was the sailing schooner Angelus, Canadian, en route from Barbados to Halifax with a cargo of molasses. The ship was stopped by a warning shot and the 10 officers and men abandoned ship in a lifeboat. The U-161’s gunners sank her with gunfire. When five days later USS Turner (DD 648) found Captain Edward Jensen and his men, eight had perished, and only two survived. They were landed in Portland Maine within three days (UBoat.net).
Born in January 1914, Albrecht Achilles was a member of the Crew of 1934. He perished on 27 September 1943 when U-161 was attacked and sunk by a US Navy Mariner aircraft northeast of Bahia, Brazil (Uboat.net). He was 29 by then and had made a reputation as a highly daring commander who had penetrated the harbors of Port of Spain Trinidad and Castries, St. Lucia to wreak havoc on Allied shipping and psyche. His total was 14 ships sunk for 64,542 tons and 6 more damaged for 41,122 tons, earning Achilles the Knights Cross as well as four other decorations (UBoat.net).
Achilles started out on the training ship Schleswig-Holstein and the battleship Gneisenau, following by officer’s school. He joined U-boats in April 1940, patrolling under Zapp in U-66, a highly successful boat. He took over U-161 in January 1942 and led several daring missions to the Caribbean, as well as Africa and Brazil.
SOURCES:
Busch, Rainer and Röll, Hans-Joachim, “German U-Boat Commanders of World War II, A Biographical Dictionary,” Greenhill Books, London and Naval Institute Press, Annapolis, MD, 1999
Helgasson, Guðmundur and Kolbicz, Rainer, www.uboat.net, 2015
Högel, Georg, “U-Boat Emblems of World War II 1939 – 1945,” Schiffer Military History, Atglen, PA, US, 1999
Kurowski, Franz, Knights of the Wehrmacht, Knight’s Cross Holders of the U-Boat Service,” Schiffer Military/Aviation History, Atglen, PA, US, 1995
Mason, Jerry, www.uboatarchive.net– for the KTB or war diary of this patrol, 2015
Niestlé, Axel, “German U-Boat Losses During World War II – Details of Destruction,” Naval Institute Press, Annapolis, MD, 1998