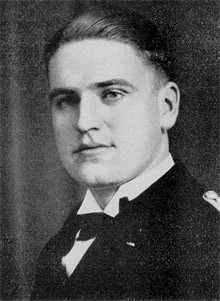 Friedrich-Hermann Praetorius, who skippered U-135 on a week-long patrol of New England in May 1942. Photo courtesy of http://uboat.net/men/commanders/939.html
Kapitänleutnant Friedrich-Hermann Praetorius brought his command U-135 into New England waters for seven days starting on the 17th of May, when he sank the ship Fort Qu’Appelle and ending on the 23rd when the submarine exited the area well south of Montauk New York on the 23rd. After sinking the Fort Qu’Appelle U-135 motored west until the 20th, when it was roughly 100 miles south of Nantucket. Then the boat dog-legged to the southeast for two days before heading southwest and out of the area.
The Fort Qu’Appelle was a 7,127-ton British steamer en route from Vancouver BC to Halifax via Panama and Jamaica when it was surprised by U-135 on her maiden voyage. The ship was between Bermuda and Halifax, southeast of Nantucket, and 13 of her complement of 34 were killed in the attack. The balance of 34 survivors were rescued by HMCS Melville (J 263) and taken to Shelbourne, Nova Scotia on 19 May.
After participating in the Padfinder group 400 miles southeast of New York Praetorius brought his sub to the Cape Hatteras region before heading back to Brest France. On the way home he found and sank the Norwegian motor vessel Pleasantville north of Bermuda. The patrol began as one of 13 U-boats in the 6th wave of Operation Paukenschlag to raid US waters, from Brest on the 26th of April. On or about the 16thof June the sub was refueled by U-459, a Milch-Kuh or U-Tanker, west of the Azores. She repositioned to St. Nazaire on the 5th of July, 1942.
Friedrich-Hermann Praetorius was born in February 1904 and was a member of the Crew of 1934. He survived the war to become a master in the German Merchant Navy before passing away at age 52 in Lubeck, Germany. Early in his naval career he served as 1st Watch Officer of U-98. He commissioned U-135 and then left her in November 1942. He earned the U-Boat War Badge 1939 for three ships sunk for 21,302 tons. U-135 was sunk under Otto Luther near the Canary Islands on 15 July 1943 by the HMS Rochester (L 50), HMS Mignonette, HMS Balsam and a US aircraft (VP-92, USN/P-6 Catalina). Though five mariners perished, 41 were rescued.
SOURCES:
Busch, Rainer and Röll, Hans-Joachim, “German U-Boat Commanders of World War II, A Biographical Dictionary,” Greenhill Books, London and Naval Institute Press, Annapolis, MD, 1999
Helgasson, Guðmundur and Kolbicz, Rainer, www.uboat.net, 2015
Högel, Georg, “U-Boat Emblems of World War II 1939 – 1945,” Schiffer Military History, Atglen, PA, US, 1999
Kurowski, Franz, Knights of the Wehrmacht, Knight’s Cross Holders of the U-Boat Service,” Schiffer Military/Aviation History, Atglen, PA, US, 1995
Mason, Jerry, www.uboatarchive.net – for the KTB or war diary of this patrol, 2015
Niestlé,Axel, “German U-Boat Losses During World War II – Details of Destruction,” Naval Institute Press, Annapolis, MD, 1998