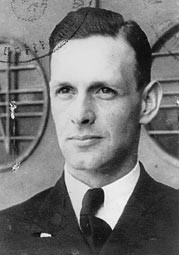 Hans
Hilbig brought U-1230 on an extensive patrol to New England between 25 November
and 20 December 1944 during which he landed agents in Maine. Photo courtesy http://uboat.net/men/commanders/483.html
Kapitänleutnant Hans
Hilbig brought U-1230 on a comparatively successful 26-day patrol to New
England between the 26th of November and 20th of December
1944, during which he landed two German agents on the coast of Maine near Bar Harbor
and sank the Canadian ship Cornwallis. Successful compared with his colleagues
who had recently patrolled the region and been harassed by Allied
anti-submarine activities and/or sunk en route back to base.
To begin with U-1230 entered
the area about 50 miles south of Cape Sable, Nova Scotia heading west for three
days until November 28th. There is variance between Wynn’s and
Uboat.net’s written account and the daily positions on Uboat.net which are
incomplete (Hilbig would not have radioed his position daily to avoid
detection). Evidently by the night of 29/30 November Hilbig had positioned his
boat deep in Maine waters, past Bar Harbor and on the north coast of Frenchman
Bay. From there Hilbig turned east for four days until December 2nd,
at which point he made for the coast of Maine.

After landing his “cargo” of
agents ashore and also managing to sink the Canadian ship Cornwallis in the
Gulf of Maine, U-1230 headed south again, to a position southeast of Nantucket.
There the boat stayed for a considerable amount of time, attempting to
intercept shipping passing the Nantucket Lightship. Specifically between the 6th
and 16th of December the U-boat seems to have remained on station
off Nantucket – about 100 miles southeast. On the 17th U-1230 was
back off Provincetown Massachusetts, then cut east across the Gulf of Maine to
a point south of Cape Sable on the 19th. The following day, the 20th
of December, Hilbig moved south and then east of Cape Sable and out of the
region.

This patrol began in Horten,
Norway (Oslofjord) on 8 October 1944 and ended in Kristiansand, Norway on the
13th of February 1945. It took 51 days, until the 29th of
November, for the U-boat to deposit two agents on Hancock Point near Bar Harbor,
Maine. The agents were Erich Gimpel and William Colepaugh, a young American
from Niantic Connecticut who was clearly unhappy with his country of birth and
snuck into Germany to be of service to the Nazi regime. They were trained by SS
Major Otto Skorzeny.

The operation, called
Elster, was for Gimpel and Colepaugh to transmit information on Allied ship
movements to Axis handlers. The two caught a taxi in a snow storm then managed
to take the train to Boston undetected. The sinking of the Cornwallis so close
to shore alerted the FBI to the chance that agents had been dropped ashore, and
locals were interviewed (two locals, one of them a former boy scout, had seen
the men and reported as much). Colepaugh lost his nerve, contacted a friend
from school, and confessed to being an agent. This after he had managed to
spend roughly two years’ income on the good life in New York and Boston. Gimpel
was then quickly caught. He has been an amateur spy in Chile before the war on
the German side. He moved to Brazil after his sentence.

William Colepaugh of Niantic CT, discharged from the Navy (“for the good of the navy”), enrolled in a German espionage program and was inserted into the coast of Maine on U-1230. Photo credit. https://en.wikipedia.org/wiki/William_Colepaugh

In February 1945 both men
were sentenced to be hung, however the sudden death of President F. D.
Roosevelt led to a stay of execution and ultimately to prison sentences. Gimpel
finished his in 1955 and Colepaugh in 1960, going on to civilian life in
Pennsylvania then Florida. He died in 2005. Gimpel published a book on the
experience called Agent 146 (St. Martin’s Press, 2003). (See Richard Sassaman’s
article “Nazi Spies Came Ashore,” Illustrated by Paul Whitman, America in WWII
Magazine, www.americainwwii.com/articles/nazi-spies-come-ashore).

Apparently though Gimpel and
Colepaugh were the last agents / spies landed in the US by the Germans in World
War II, there was another who tried. Oskar Mantel, age 40, was to be dropped
off in Maine in August 1944, aboard U-1229. The boat was sunk and 40 men
survived and were taken prisoner. Mantel was one of them, and confessed his
plan (he had lived in New York City for a dozen years and snuck into Germany
via Japan and Russia) (c/o 310 Publishing LLC, “A Would-Be Nazi James Bond.” –
America in WWII Magazine).

U-1230 sank the Cornwallis
on the 3rd of December 10 miles southwest of Mount Desert Rock off
the Maine Coast at 10 am German time. The attack was devastating on the
5,458-ton ship which had already survived being torpedoed by U-514 whilst at
port in Bridgetown Barbados. Captain Emerson Horace Robinson and 42 others
including 7 gunners perished in the freezing and darkened waters. The only five
survivors were rescued by the F/V Notre Dame and taken to Rockland, Maine
(Uboat.net).

Hans Hilbig was born in July
1917 and survived the war, living until 2004 and the age of 86. A member of the
Crew of 1936 he was until March 1943 seconded to the Luftwaffe (Busch &
Roll). The following month he joined U-boats and the 27th Flotilla,
then in October 1943 the 23rd U-Flotilla. He commanded U-1230 from
the 26th of January 1944 until the surrender. There is no record of
his having served as a POW. He patrolled for 138 days and sank one ship – the Cornwallis.
Hans Hilbig received no decorations.
SOURCES: