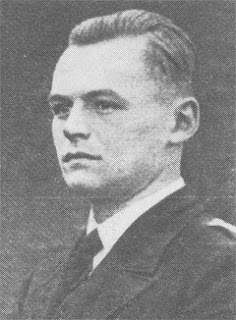 Volker Simmermacher,
commander of U-107 who patrolled New England for just three days between the 12th
and 14th of June 1944. Photo courtesy of http://uboat.net/men/commanders/1196.html

Kapitänleutnant Volker
Simmermacher brought his command U-107 into the New England region for just
three days between the 12th and 14th of June, 1944. The
boat approached from about 100 miles south of Cape Sable, Nova Scotia, headed
northwest for a day until the 13th, then southeast and out of the
region on the 14th of June.
While in the region U-107
attacked and damaged the American fishing sailboat Lark at 830 am (German time)
on the 13th of June, about 75 miles south of Cape Sable (on the
Baccaro Bank, 50 miles west of Cape Roseway according to Wynn). The Lark was a
148-ton fishing vessel owned by F. J. O’Hara Brothers of Boston Massachusetts.
Her captain was James L. Abbott. There were 27 men on board. After a torpedo
missed, Simmermacher fired a warning shot over their bows, which brought the
diesel engine to a halt. The men abandoned ship in five fishing dories
(Uboat.net), except for Captain Abbott and the ship’s cook, who remained
aboard.

The U-boat crew shot up the
sailing vessel, her rigging, hull, deck and pilot house, however the Lark did
not sink. According to Wynn the U-boat’s 3.7-cm gun jammed after 15 rounds were
fired. When the sun rose 40 minutes later U-107 motored away, permitting Captain
Abbott to re-start the Lark’s motors and pick up his crew. When the Lark
arrived in Boston it was a media sensation, as the bullet marks and shell holes
were clearly visible. (The author has photos of the boat returned to Boston
from this attack which he will share in due course).

This patrol began in Lorient
on the 10th of May 1944 and ended there 75 days later on the 23rd
of July. The Lark was the only vessel damaged during the patrol. U-107 was the
first of the new schnorkel fitted boats to reach the Americas. She was ordered
back to base in July but instructed to keep enough fuel to make for Bergen
Norway in case the Atlantic ports fell to advancing Allies.

Volker Simmermacher was born
in February 1919 in Strasbourg and survived the war, living until 199 and the
age of 80. His career total was 3 ships damaged for 15,570 tons, including the
USS Rapidan damaged by mines in September 1943. He received no decorations. A
member of the Crew of 1937a, he served as a Watch Officer aboard the battleship
Scharnhorst to May 1941, then began U-boat training. He was Watch Officer of
U-107 under Harald Gelhaus from November 1941 to June 1943. He took over
command of U-107 in July 1943. He skippered the boat until August 1944, then
want to work-up for U-3013, which he commanded from November 1944 until the
capitulation in May 1945.