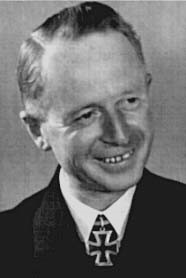 Ernst Kals, skipper of U-130, one of the boats in the first wave of five U-Boats to US waters in 1942. Courtesy of http://uboat.net/men/kals.htm
U-130 under Korvettenkapitän(later Kapitän zur See) Ernst Kals was the second to last of five U-Boats in the first wave of Operation Paukenschlag attacks in January 1942 (the others as we have seen were U-66, U-109, U-123, and U-125). It was a busy patrol for the submarine before it even arrived in New England. Having left Lorient on the 27th of December 1941 the boat was surprised by a Royal Canadian Air Force Bolingbroke bomber which dropped two depth charges on the sub on the 12th of January.
On the 13th Kals and crew sank the Norwegian ship Frisco and the Panamanian ship Friar Rock. Then on the 18th of January, just before entering New England waters, the sub made two attacks on a ship off Cape Breton Island but was driven off by a US Navy destroyer. Kals then brought U-130 west from a point south of Cape Sable (Nova Scotia) on the 20th of January to south of Montauk, Long Island (NY) four days later.
In waters roughly off the middle of the Gulf of Maine U-130 found and sank the Norwegian tanker Alexandra Hoegh of 8,248 tons. After an initial torpedo strike on the port bow, Kals waited for the men to abandon ship before delivering a coup-de-grace. The ship sank and the 28 survivors divided between two lifeboats, the motorized one towing the rowboat until they were discovered by the Boston-based trawler Grand Marshall on the 23rd of January (two days later) and landed at Shelbourne, Nova Scotia the same afternoon. 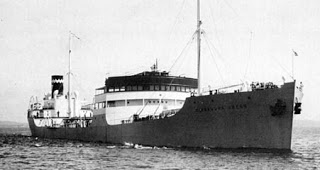 The Norwegian motor tanker Alexandra Hoegh, sunk by U-130/Kals off the Gulf of Maine January 21, 1942. Photo courtesy of http://uboat.net/allies/merchants/ships/1276.html
U-130 continued to the coastlines of New Jersey and Delaware, where it dispatched another Norwegian tanker, the Vernanger (25 January) and then the US-flagged steamer Francis E. Powell (27 January). On the same day U-130 damaged the US tanker Halo off Hatteras. It then bent its course eastward toward Europe again, re-entering the region around New England on the 28th of January and exiting south of Cape Sable on the 2ndof February.
On the 4th of February U-130 and U-109 met mid-ocean whilst north of Bermuda, and U-130 provided some fuel for the other sub, which was under Heinrich Bleichdrodt. On the 18th of February U-130 and U-587 had a rendezvous in which Kals received five downed German fliers who had been shot down in the Bay of Biscay and rescued by U-587. The sub returned to Lorient on the 25th after a 61-day patrol.
Ernst Kals was born 2 August 1905 and was thus was 36 years of age at the time of this patrol. Born in Saxony he was in the Naval Class of 1924 and in early WWII served as a gunnery officer aboard the cruiser Leipzig. Late in 1940 he joined U-Boats and was ably mentored by Nicolai Asmus Clausen in U-37. On Kals’ first voyage in command of U-130 he claimed three ships sunk. He later experienced destructive results in the Caribbean, West Africa and particularly against Operation Torch where he sank three American transport ships for the loss of 105 US lives (most survived).
Kals served as Commanding Officer of the U-Boat operations at Lorient from January 1943 until surrender, and was badly injured by a landmine in November 1944. Captured by the Allies on the 10th of May 1945, he was not released until 20 January 1948. Kals was the 124thserviceman and 62nd U-Boat sailor to receive the Knights Cross. He survived the war, and died in Emden on November 8, 1979 at age 74, having sunk or damaged 21 ships.
SOURCES:
Busch, Rainer and Röll, Hans-Joachim, “German U-Boat Commanders of World War II, A Biographical Dictionary,” Greenhill Books, London and Naval Institute Press, Annapolis, MD, 1999
Helgasson, Guðmundur and Kolbicz, Rainer, www.uboat.net, 2015
Högel, Georg, “U-Boat Emblems of World War II 1939 – 1945,” Schiffer Military History, Atglen, PA, US, 1999
Kurowski, Franz, Knights of the Wehrmacht, Knight’s Cross Holders of the U-Boat Service,” Schiffer Military/Aviation History, Atglen, PA, US, 1995
Mason, Jerry, www.uboatarchive.net – for the KTB or war diary of this patrol, 2015
Niestlé,Axel, “German U-Boat Losses During World War II – Details of Destruction,” Naval Institute Press, Annapolis, MD