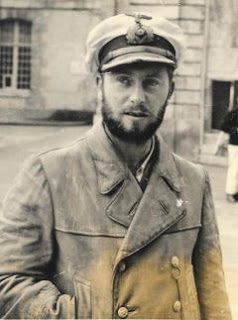 Ulrich Folkers after patrol, courtesy of http://uboat.net/men/folkers.htm
KapitänleutnantUlrich Folkers, age 26, took his command U-125 into New England waters on the same day as Hardegen in U-123 – the 12th of January, 1942. His destination was the shipping lanes off Nantucket, where he spent from the 14thuntil the 22nd patrolling, with no tangible result.
U-125 left Lorient France on the 18th of December 1941 as one of five boats ordered to initiate Operation Paukenschlag off the American coast. On the 22nd of December the submarine encountered northbound convoy HG 76 but could not penetrate the task force protecting it.
Between the 17thand 20th of January U-125 lingered off the Nantucket Lightship, waiting for victims coming from or going to New York, but evidently found no suitable targets. Then on the 21st Folkers took his boat to the northeast of Nantucket, past Siasconset, and dangerously close to the Nantucket Shoals, still finding no victims. 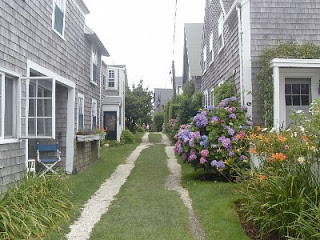 The historic fishing cottages, now summer dwellings, of Siasconset, or Sconset, Nantucket.
Photo c/o http://www.homeaway.com/vacation-rental/p175241
No doubt exasperated, Folkers headed southwest at a fast clip and on the 25th fired a torpedo at the US tanker Olney, missing the target, though the ship was aground and a detonation was heard. That was off the entrance to Chesapeake Bay. He had better luck off Cape Hatteras, where he sank the US steamer West Ivis (5,666 tons) before returning to France, where she arrived on the 23rd of February.
According to UBoat.net, “The BdU [central U-Boat command, Admiral Donitz] was not very happy with Folkers’ performance on his first patrol,” though he was able to redeem himself in subsequent actions.
Ulrich Folkers was born on 6 March 1915 in Kiel and was in the naval academy class of 1934. Early in his naval career he served on the light cruiser Emden and as watch officer on the destroyer Z 8, Bruno Heinemann. He was killed on the 6th of May 1943 when U-125 was sunk between Greenland and Newfoundland by British destroyers. According to U-Boat loss expert Axel Niestle, the submarine was scuttled, after being rammed and suffering artillery fire from HMS Oribi and HMS Snowflake, leaving open the possibility that at least some of the men survived the sinking but drowned in the North Atlantic.
SOURCES:
Busch, Rainer and Röll, Hans-Joachim, “German U-Boat Commanders of World War II, A Biographical Dictionary,” Greenhill Books, London and Naval Institute Press, Annapolis, MD, 1999
Helgasson, Guðmundur and Kolbicz, Rainer, www.uboat.net, 2015
Högel, Georg, “U-Boat Emblems of World War II 1939 – 1945,” Schiffer Military History, Atglen, PA, US, 1999
Kurowski, Franz, Knights of the Wehrmacht, Knight’s Cross Holders of the U-Boat Service,” Schiffer Military/Aviation History, Atglen, PA, US, 1995
Mason, Jerry, www.uboatarchive.net – for the KTB or war diary of this patrol, 2015
Niestlé, Axel, “German U-Boat Losses During World War II – Details of Destruction,” Naval Institute Press, Annapolis, MD