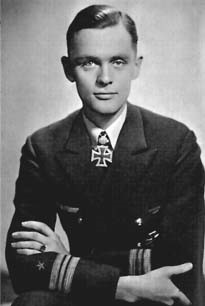 Reinhard Hardegen, courtesy of http://uboat.net/men/hardegen.htm
U-123 under Reinhard Hardegen was the first German submarine, or U-Boat to invade the United States under Operation Paukenschlag, or Drumbeat (literally kettle drum roll). Born in Bremen, Germany on March 13, 1913, Hardegen is remarkably still alive in Fall 2015, at age 202. At the time of this patrol he was Kapitänleutnant, however at the end of his storied career he was promoted to Korvettenkapitän. At the end of this patrol he would be awarded the Knights Cross, and thereafter the Knights Cross with Oak Leaves and in May of 1942 the U-Boat Badge with Diamonds.
Hardegen has been the subject of a great number of books, interviews and film treatment, and understandably so, as he sank 22 Allied ships of 115,656 tons and damaged another five for 46,500 tons, including the HMS Aurania (F-28) of 13,984 tons. He was fooled by the US Navy Q-Ship, or decoy named USS Atik (AK 101, ex-Carolyn) and after losing a man to the US counter-attack he destroyed the vessel with the loss of all 141 officers and men.
Hardegen was a member of the Class of 1933 and began with the German naval air arm before an injury resulted in his joining U-Boats in 1939, roughly two years before the attack on Pearl Harbor precipitated the US’ entry into the war against Germany on December 11th, 1941. He first served as skipper of U-147 then in May of 1941 he took over U-123 from Karl-Heinz Moehle. The boat was in the Second (Front) Flotilla based in Lorient, France. Before he moved ashore in May 1942 Hardegen berthed at the Blucher Bridge in Germany flying the pennants of all 45 ships which U-123 had sunk over its career. 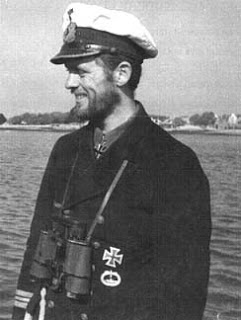 Hardegen returning from patrol. Courtesy of http://uboat.net/men/hardegen.htm
On his patrol to New England waters Hardegen was supported by First Watch Officer Rudolf Hoffmann, Second Watch Officers Horst von Schroeter and Bosun Walter Kaeding. They left Lorient two days before Christmas in 1941 and returned 49 days later on the 9th of February, 1942. While approaching the sea border between Canada and the US Hardegen dispatched the Cyclops, a British ship of 9,076 on the 12th of January, then entered the area south of Cape Sable, Nova Scotia.
Two days later U-123 attacked and sank the Panamanian tanker Norness of 9,577 tons south of Long Island. The location was 75 nautical miles south-southeast of Montauk Point, Long Island, New York, 77 miles south of Block Island, 90 miles southwest of Martha’s Vineyard and 100 miles southwest of Nantucket. That places her 125 from Ambrose Light off New York City.

The tanker Norness, sunk by Reinhard Hardegen south of Block Island, Rhode Island, US Jan. 14 1942. Courtesy of http://uboat.net/allies/merchants/ships/1248.html
Out of 41 men aboard the tanker (which had been built in Hamburg, Germany), all but 2 were rescued by a US Navy destroyer (USS Ellyson DD 454), a US Coast Guard Cutter (USCGC Argo WPC 100), and the fishing boat Malvina, which took them to the US Navy base in Newport, Rhode Island after a US Navy blimp had vectored them to the wreck, which still remained visible in shallow waters.
The following day, the 15th of January, Hardegen sank the Coimbra south of Long Island, and followed this with the sinking of the Norvana, City of Atlanta, Ciltvaira, Culebra, and Pan Norway off the US East Coast and north of Bermuda on the sub’s return voyage. They also damaged the Malay. Most of the casualties were inflicted at “Torpedo Junction” off Cape Hatteras.
After damaging the Malay in very shallow water U-123 came within 250 feet of being rammed and run over by the Norwegian factory-whaling vessel Kosmos II, but managed to start a disabled engine at the last minute and slowly outpace the merchant ship over a wrenching two hours of pursuit. The last two ships of the patrol – Culebra and Pan Norway – were dispatched by gunfire as the sub was out of torpedoes. Though all the men on the Culebra perished, Hardegen vectored the Greek steamer Mount Etna to the rescue of the Pan Norway survivors.
U-123 had several emblems during its career, embellished by tonnage numbers and the awards that Hardegen received. One of them featured a drum stick beating on a kettle drum.