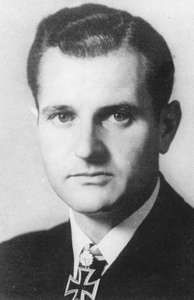 Heinrich Bleichrodt, skipper of U-109 which spent 12 days off New England near Nova Scotia in January 1942. Courtesy of http://uboat.net/men/bleichrodt.htm
Kapitänleutnant(later Korvettenkapitän) Heinrich “Ajax” Bleichrodt brought U-109 into a complex 12-day patrol off Cape Sable, Nova Scotia and into the Gulf of Maine between the 17th and 28th of January, 1942. He was one of the first five U-Boat skipper to attack the Americas (U-123, U-66 and U-125 went to the US, U-130 to the Gulf of St. Lawrence and U-109 off Nova Scotia.
The patrol was a qualified success, though the first intended victim, a tanker, avoided all six torpedoes fired at it on the 19th of January nearly within sight of Nova Scotia’s southeastern tip. Four days later Bleichrodt had more success, sinking the Thirlby, a British steamer of 4,887 tons in the same general area. 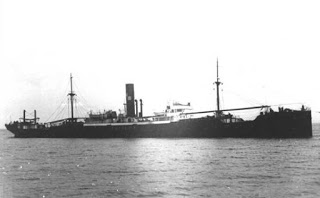 The British steamer Thirlby, sunk of Cape Sable, NS Canada by U-109 on 23 Jan. 1942.
Photo courtesy http://uboat.net/allies/merchants/ships/1284.html
After doubling Cape Sable several times the U-Boat headed south in the direction of Bermuda and sank the steamer Tacoma Star (7,924 tons) on the 1st of February. Three days later U-130 provided fuel for U-109, which on the following day sank the British tanker Montrolite, followed the next day by the Halcyon, also north of Bermuda (see www.uboatsbermuda.blogspot.comfor descriptions of the patrol as well as the loss of these three ships).
The last ship having been sunk by gunfire alone, Bleichrodt bent a course back to Lorient, where the sub arrived on February 23rd after 59 days. His first watch officers were future commander Friedrich-Wilhelm Wissman as well as Siegfried Keller.
Born on 21 October 1909, Bliechrodt survived the war and died in Munich on the 9th of January 1977. He began his career on the sail training vessel Gorch Fock (later USCG Eagle), as well as the heavy cruiser Admiral Hipper. He served on U-8 as well as U-34, in which as first watch officer he sank eight ships. Aboard U-40 his 1WO was future ace Reinhardt “Teddy” Suhren. The commander commissioned U-67 in 1941. He went on to become an instructor and Flotilla Chief.
Bliechrodt was heavily decorated by both the Germans and Italians, earning the Knights Cross with Oak Leaves, U-Boat Badge with Diamonds, and War Merit Cross 2nd Class with Swords.
SOURCES:
Busch, Rainer and Röll, Hans-Joachim, “German U-Boat Commanders of World War II, A Biographical Dictionary,” Greenhill Books, London and Naval Institute Press, Annapolis, MD, 1999
Helgasson, Guðmundur and Kolbicz, Rainer, www.uboat.net, 2015
Högel, Georg, “U-Boat Emblems of World War II 1939 – 1945,” Schiffer Military History, Atglen, PA, US, 1999
Kurowski, Franz, Knights of the Wehrmacht, Knight’s Cross Holders of the U-Boat Service,” Schiffer Military/Aviation History, Atglen, PA, US, 1995
Mason, Jerry, www.uboatarchive.net – for the KTB or war diary of this patrol, 2015
Niestlé,Axel, “German U-Boat Losses During World War II – Details of Destruction,” Naval Institute Press, Annapolis, MD